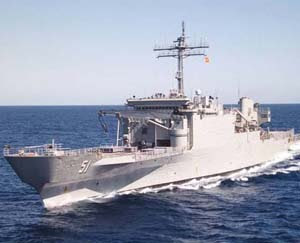 Below is the text of a Defence Media Release of today’s date reporting on the return from Padang of HMAS Kanimbla following the completion of its humanitarian mission:

From Padang, Kanimbla transported 446 ADF personnel back to Australia and arrived in Sydney with 256 aboard, having disembarked some personnel in Darwin and Townsville. Many of the families of those still aboard were dockside for reunions with their loved ones.

While in Padang, the combined ship’s company and embarked force of around 350 ADF personnel completed a number of remediation tasks.

“The ship’s company were proud to work alongside our Indonesian counterparts and to make a difference to the Padang community in their time of need,” Commander Byles said.

This is what the Navy’s website says here about HMAS Kanimbla:

HMAS Kanimbla was built for the United States Navy as USS Saginaw and was commissioned into the Royal Australian Navy in August 1994. She has under-gone extensive modifications for her new role as a helicopter capable amphibious transport ship.

Kanimbla's primary role is to transport, land and support a force of up to 450 personnel, their vehicles and equipment. Kanimbla is fitted with a helicopter hangar capable of supporting up to four Army Black Hawk or three Navy Sea King helicopters. Army landing craft can also be carried on the forward flight deck to provide ship-to-shore transport. Accessed through a stern door, storage space is available on the vehicle deck for Army vehicles and other large items of equipment.

The ship has operations and planning rooms and a comprehensive array of communications equipment to support joint operations. Kanimbla is fitted with the largest and most comprehensive medical facilities in the Fleet, with a 40-bed hospital incorporating full surgical and recovery facilities.

The point of commenting on this is in the post, apart from noting the sterling humanitarian service that the Australian Defence Force invariably provides to our regional neighbours in natural disaster situations, is to make a point about the looming obsession with acquiring military capabilities “off the shelf”, rather than acquiring purpose designed equipment, as a way of stretching the defence budget to fit the Government’s ambitions.

The project to commission HMAS Kanimbla and its sister ship HMAS Manoora was in its later stages when I was Secretary to the Department of Defence in the late 1990s. It was what in today’s parlance would be called a “project of concern”, with over-runs of both cost and schedule.

- Manoora and Kanimbla were decommissioned US Navy ships which were purchased on an “as found” basis, which meant that they came with no warranties, express or implied. The price paid reflected that.

- When their refit began they were found to have somewhat more rust than had been anticipated by the Navy survey team that had inspected them prior to purchase, which inevitably added time and cost – but again, the price reflected the fact that they came on an as found basis.

- The planning and operations rooms, communications facilities supporting joint operations and medical facilities were not part of the original platforms that were purchased. They were, very sensibly, added to the scope of the refit in order to give us a much more flexible capability for the variety of circumstances our relatively small Navy might encounter in our theatre of operations. The United States can afford to build large fleets of highly specialised ships; we need to maximise flexibility of operational capability.

The capabilities that were added to these transport vessels mean that Manoora and Kanimbla have served the ADF well in a variety of operations, and it is hard to imagine some of our operations being conducted without them. The press had a field day at the time, revelling in yet another tale of Defence’s incompetence, but this is a story that turned out very well in the end.

The key point is that Defence took some risks to give us this capability – the risk in the original purchase, and the risks involved in the ambitious scope of the refit. We need to be very careful that the current pressures to place more reliance on off-the-shelf purchases does not leave us with capabilities that are less than we need. When it comes to putting people in harm’s way, we owe the ADF and ourselves equipment that is as fit for purpose as it can possibly be. Winning is everything in this game.