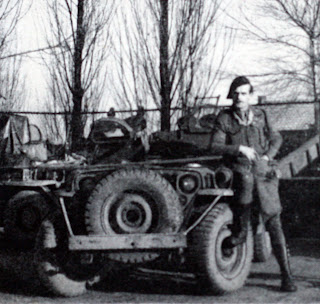 One of my next projects will be to write a piece about Jock McDiarmid MM C de G, School Sergeant at The Armidale School from 1957-59 and from 1961-April 1962.
As the Croix de Guerre indicates, Jock had an outstanding war record, having seen action with the Special Air Service behind German lines in the invasion of Sicily and the liberation of France, followed by further action in Holland (where the picture was taken in 1945) and Germany.
Unfortunately my source materials are limited to personal recollection, former SAS officer D.I. Harrison’s book These Men Are Dangerous  (Cassell and Company Limited, 1957), and a fleeting reference on a Special Forces website which tells me that Jock is still alive, aged 93, and still living in Australia.
If there is anyone out there who has any solid information about Jock, or can identify any source material, or who knows someone who might know someone, please leave a comment.
Posted by PAUL BARRATT at 5:23 PM