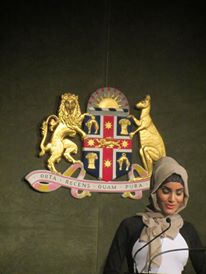 I have been meaning for quite some time to post a link to this moving piece by my friend Widyan Al Ubudy. It says most of the things that I would like to say, but comes from someone far more qualified to say them. Today, the day of the release of the Coalition’s appalling policy for those seeking refuge in this country, this foundation member of the United Nations and of the Refugee Convention, seems a most fitting day to post it.

Although Widyan, an Iraqi refugee who has lived in Australia for most of her life, laments the excision of the Australian mainland from the migration zone by the Gillard Government, we can remember that excising bits of the territory began with the Howard Government and that Kevin Rudd and Tony Abbott have continued their race to the bottom.

On the legislation passed in May, Widyan writes:

This is not why my father refers to Australia the ‘Golden land of opportunity’.

This is not the country that welcomed us with open arms in 1995.

For the full post see The day Australia became un-Australian.
Posted by PAUL BARRATT at 11:36 AM