Parliament should decide on the deployment of armed force

In “Parliamentary Vote Would Dangerously Restrict Executive in War” (The Australian, 2 September) Russell Trood and Anthony Bergin assert that the idea of Parliament voting on decisions to go to war is poor public policy. None of the arguments they advance in support of this claim hold water.

The point is made that Governments need the capacity to react quickly to events. Quite so, but the occasions would be rare when the capacity of the ADF to deploy would be held up by Parliamentary process. Apart from the Ready Reaction Force at Townsville, most combat elements of the ADF are held at a low state of readiness. Quite properly, most units are not maintained in a battle-ready state, and before they can be deployed a major investment in both personnel training and materiel is required in order to bring them up to the required standard. Preparation of a brigade group for deployment to East Timor took six months and hundreds of millions of dollars.

Regarding the high readiness forces, it would be quite easy to draft into legislation requiring Parliamentary authorisation a provision for an emergency response, with a requirement for a statement setting out the nature and purpose to be tabled within three or four sitting days.

A second argument – one often regarded as the supreme card to play – is that the Government might have access to information or intelligence which it cannot reveal.

This is an argument that simply cannot be accepted within the framework of a Westminster-style Parliamentary system. While it is certainly true that a government may be in possession of information that cannot be used in Parliamentary debate, it is fundamental to our system that today’s Opposition Leader could be tomorrow’s Prime Minister – even without an election. All that is required for the government to fall is for it to fail to win a confidence motion on the floor of the House of Representatives, at which point the Prime Minister of the day will normally advise the Governor-General to prorogue Parliament and call a general election, but the Governor-General would have the alternative of giving the Opposition Leader an opportunity to test the confidence of the House. It is clear that in recent days the Government has been giving the Opposition leadership briefings which the Opposition feels unable to share with the public.

For purposes of Parliamentary debate, situations will be rare in which a direct threat to Australia would emerge without any warning signs being discernible from open sources. Thus whatever secret intelligence the government might possess which confirms its suspicions about an emerging threat, it is safe to assume that for Parliamentary purposes it will be able to follow the commonplace practice of presenting a rationale which derives from open sources, and perhaps simply stating that this picture is confirmed by classified information in the government’s possession, which information has been shared with the Opposition leadership.

A third argument is the old canard that a Parliamentary vote would “simply hamstring the government of the day to the whim of minor parties”. For the negative vote of a minor party to be effective, however, it would be necessary that there also be a negative vote from the major Opposition party: the combined votes of Government and Opposition would make the views of the minor parties irrelevant. As it is difficult to conceive of a major (or indeed a minor) party voting against deployment of the ADF at a time that the nation is genuinely under threat, this sounds more like a concern that the involvement of the Parliament would make it more difficult for the Government of the day to inject the ADF into wars of choice – which is of course the whole point of the exercise.

Trood and Bergin also advance the extraordinary argument against Parliamentary authorisation that “in a complicated world the occasions and circumstances in which force in its various manifestations is required is becoming more difficult to describe and define”. This is in fact one of the strongest reasons in support of mature Parliamentary debate and resolution: to guard against the future possibility of the leadership of the day rushing us off into ill-thought out military adventures, with no clear definition of the aims, duration, prospects of success or exit strategy.

It needs to be clearly understood that we are not advocating that Parliament be involved at every step in the management of our involvement in an armed conflict, simply that it be the body that authorises our entry into any particular occasion requiring or likely to require the use of armed force. Authorisation could be given prior to it becoming certain that conflict is inevitable, but it would need to address a defined situation in a particular geographical region. Once the authorisation is given, it would last for a defined period, say 60 days, beyond the cessation of hostilities and within that period it would be left to the Government of the day to determine how to react to circumstances as they evolve.

Those who would rule out any role for the legislature other than post hoc debate would have us increasingly out of step with the practice of other representative democracies. As recently as last year the question of UK participation in air strikes against Syria was put to the House of Commons and was resoundingly defeated – an outcome which rapidly came to be seen as wise.

At the end of the day it all comes down to whether we trust the Parliament, or trust a single individual, no matter how clever he/she might be.  A strong Prime Minister will be able to convince the Cabinet, and that is a one person decision as was the case in the Iraq War.  We most certainly should have Parliamentary approval before Australia can be taken to war.

Malcolm Fraser was Prime Minister of Australia, 1975-83. Paul Barratt is a former Secretary to the Department of Defence and is President of the Campaign for an Iraq War Inquiry .
Posted by PAUL BARRATT at 7:36 AM No comments:

Late this afternoon I went to a wonderful Musica Viva performance in Armidale Town Hall: Genevieve Lacey (recorders) and James Crabb (classical accordion). No I didn't know there was such a thing as a classical accordion either, and was wondering what to expect, but there is, and it's a pretty serious instrument - a lot of intricate mechanisms to enable all the required chords to be played in both major and minor keys. About $50,000 worth and weighing in at 20 kg. In the hands of a master it makes a wonderful sound - or rather, a wonderful range of sounds: best thought of as a kind of portable organ. They played a very diverse program, from 16th century music (Diego Ortiz, Palestrina, Matthew Locke, Jacob van Eyck) to Bach, children's songs by Chick Corea, an extraordinary solo piece for classical accordion by John Zorn - a representation of the musical score for a Road Runner cartoon - some commissioned pieces written by composer friends, finishing with renditions of two folk songs from Crabb's native Scotland. Don't miss them if you have the chance to hear them. Well worth it, and their enthusiasm for what they are doing is infectious. 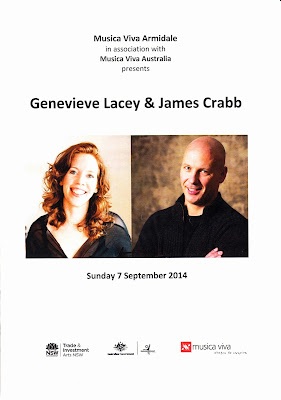 Posted by PAUL BARRATT at 8:01 PM No comments:

My apologies to my readers for a two-month silence, the reason being that in that time I have moved from Melbourne to Armidale, and with the exigencies of selling a house, packing up a lifetime's possessions, finding and purchasing a new place in which to live, and settling in, something had to give. Happily life is returning to something more like normal, so normal transmissions can resume.
Posted by PAUL BARRATT at 7:58 PM No comments: