In Petro Georgiou on the anti-terror laws I noted the concerns of the Member for Kooyong that the Government has introduced legislation, in the form of the National Security Monitor Bill, which purports to provide for independent review of the 49 anti-terror laws which have been passed by Federal Parliament since 9 September 2001, but which fundamentally negates every principle of statutory independence.

Perhaps someone in government has been making a close study of Sir Edward Gibbon’s The History of the Decline and Fall of the Roman Empire, and drawn inspiration from his observations about Augustus:

... the system of the Imperial government as it was instituted by Augustus ... may be defined an absolute monarchy concealed as a commonwealth. The masters of the Roman world ... concealed their irresistible strength, and humbly professed themselves the accountable ministers of the senate, whose supreme decrees they dictated and obeyed.

Caesar had provoked his fate ... The title of king had armed the Romans against his life. Augustus was sensible that mankind is governed by names; nor was he deceived in his expectation, that the senate and people would submit to slavery, provided they were respectfully assured that they still enjoyed their ancient freedom. A feeble senate and enervated people cheerfully acquiesced in the pleasing illusion ...

If we, the enervated people of Australia, acquiesce in the pleasing illusion that the National Security Monitor Bill provides some sort of protection for our civil liberties, we will have no-one to blame but ourselves.

Posted by PAUL BARRATT at 11:36 PM No comments: 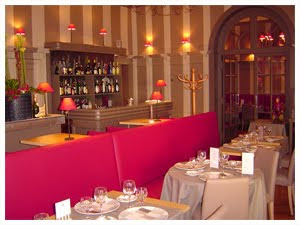 In January this year my family and I had the pleasure of an evening meal at the Restaurant Raphaël Béringer www.restaurant-raphaelberinger.com in the Presqu’île area of central Lyon, one of the restaurants profiled in the article Tour de Lyon in the July 2006 edition of Gourmet Traveller.

Béringer is a chef from the Savoie who took over an old-style Lyonnaise bouchon (Tante Alice) and converted it over time into a contemporary restaurant. It is well worth a visit.

The address given in Gourmet Traveller (22 Rue des Remparts d’Ainay) is confusing, albeit correct. On its website the restaurant gives its address as 37 Rue Auguste Comte, and although both addresses are correct – the restaurant is on the corner of the two streets – it is probably easier to find it by trawling along Auguste Comte. But note that Auguste Comte is a one way street, so if you hit it downstream of the restaurant, as we did, you will be transported away from it and have to make another circuit, and maybe another.

Parking in the narrow streets of that area is a nightmare. We managed to find a parking space reasonably nearby in very inclement winter weather; in milder weather I would be inclined to hit the parking station under Place Bellecour and stroll up Auguste Comte to the restaurant.

The website given in Gourmet Traveller is wrong; the one given above is correct.

Posted by PAUL BARRATT at 5:54 PM No comments:

Petro Georgiou on the anti-terror laws

In an op-ed piece in the 24 October edition of The Age, published online here by The National Times, Liberal backbencher Petro Georgiou describes how the recently introduced National Security Monitor Bill is a travesty as far as its claimed purpose of providing for independent review of the 49 counter-terror laws that have been passed since 9 September 2001 is concerned. He says:

The bedrock of all the recommendations for a reviewer is independence from executive control and censorship, freedom to determine priorities, and examine all terrorism laws. Independence requires the ability to report publicly to Parliament, subject to not prejudicing national security, operations or trials.

The monitor bill fundamentally negates every element of statutory independence. It deploys every legislative artifice, legal and symbolic, to neuter the monitor. Other than the overweening crassness of the refusal to mention the word ''independent'' and the specification that the monitor can only be part-time, [Yes Minister character] Sir Humphrey [Appleby] would be impressed.

The bill prevents the monitor from determining his or her own priorities - that role is given to the Prime Minister, who can also change them and demand so-called ''interim'' reports. The monitor can only report to the Parliament annually.

The monitor cannot examine any law that has not been applied in the current or past financial year and any report has to be vetted by the Prime Minister and every relevant federal, state and territory minister. The monitor is prohibited from reporting to the Parliament on a range of fundamental issues including security operations, information provided by agencies, information about operational activities and methods, priorities and resources.

The monitor bill is a travesty, but it is not a joke. The avalanche of terrorist laws since 2001 has radically curbed the protection of the individual. To safeguard our democracy, strong, independent and ongoing scrutiny of these laws and their operation is needed. The Government's monitor is a subverted safeguard. If this legislation passes into law, the monitor will effectively be handcuffed, gagged and tied to the whim of the government.

This state of affairs has to be of concern to everyone who is concerned about the impairment of basic civil and legal rights enshrined in the spate of anti-terror legislation that was rushed through the Parliament by the Howard Government to the enthusiastic cheers of the Labor Opposition.

Posted by PAUL BARRATT at 1:55 PM No comments:

Uhlmann on Rudd on asylum seekers

ABC journalist Chris Uhlmann has published a spirited critique of Prime Minister Kevin Rudd’s recent pronouncements on asylum seekers, measuring them against earlier pronouncements made by Mr Rudd in places such as his essay Faith in Politics, published in the October 2006 edition of The Monthly.

In his critique, published in the ABC’s Off Air blog here, and TheWeekend Australian 24-24 October here, Uhlmann notes:

In his essay Faith in Politics, Mr Rudd set a high bar for the way a Christian should act in the world. His model was German theologian Dietrich Bonhoeffer, the 20th Century figure he admires the most. Mr Bonhoeffer's faith demanded he confront injustice and he asked, "Who speaks boldly to the state for those who cannot speak for themselves?"

Mr Rudd argues this means "that a core, continuing principle shaping this engagement should be that Christianity, consistent with Bonhoeffer's critique in the '30s, must always take the side of the marginalised, the vulnerable and the oppressed".

Mr Bonhoeffer certainly did. And the state he spoke boldly to was run by the Nazis. He spoke courageously against the Nazi state from its inception, worked in the resistance and, in April 1943, was arrested after money used to help Jews escape to Switzerland was traced to him.

While in jail he was linked to the failed attempt to assassinate Hitler and on April 9, 1945 he was stripped, led naked from his cell and hanged with piano wire. Not for nothing did Mr Bonhoeffer say that when Christ calls a man, "he bids him come and die".

In Faith in Politics, Mr Rudd measured the Howard government against the kind of Christianity Mr Bonhoeffer preached and found it wanting. He listed a series of challenges for Christians who followed Mr Bonhoeffer's example.

Among them was this, "Another great challenge of our age is asylum seekers. The biblical injunction to care for the stranger in our midst is clear. The parable of the Good Samaritan is but one of many which deal with the matter of how we should respond to a vulnerable stranger in our midst.

There is more in that vein, and then Uhlmann concludes:

The Government has softened Australia's stance towards asylum seekers and it is determined to maintain strong border protection. These are not mutually exclusive propositions and there are defensible, reasons for doing both.

But confronted with a rising tide of boat people it panicked because it was scared its policy changes would be blamed for the influx and the electorate would punish it.

So the Prime Minister was faced with a choice. The narrow gate was to make a complex argument, to explain what he was doing, and to try and change the tone of Australia's debate about asylum seekers.

The wide path was to play the hard man and tub thump.

His life was not at risk. The state he had to speak boldly to is run by him. All he was risking was an approval rating of 71 per cent.

In the modern, relativistic, world of politics the only way of measuring a man or woman is against their own words.

This was not a large test of character. But it is a telling one.

Hard to disagree with any of that.

Posted by PAUL BARRATT at 1:30 PM No comments: