On the trail of Jock McDiarmid

In Jock McDiarmid, MM C de G I  posted a plea for information or source material that would assist me to write a piece about a former World War II Special Air Service Regiment soldier who was School Sergeant at The Armidale School from 1957-59 and from 1961-April 1962.
There is not much about Jock on the web – his exploits, having taken place before the information age, are largely unrecorded.
My principal source is D.I Harrison’s These Men Are Dangerous: The Special Air Service at War, Cassell and Company, London, 1957, which was awarded to me as a school prize in 1957. The School was proud of Jock.  This book mentions Jock’s involvement in the British invasion of Italy across the Strait of Messina, for his part in which he was awarded Military Medal in 1943 (see Jock McDiarmid’s MM commendation), and his involvement in operations behind German lines in France in 1944. There is also a photo of D.I Harrison and Jock in Holland in 1945. 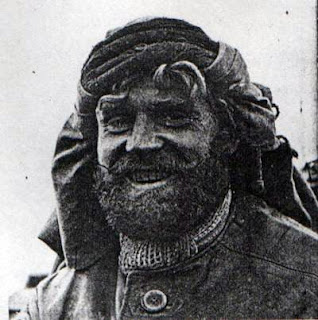 What I did not know was whether, prior to the invasion of Sicily, Jock had a background of operations in North Africa as well. I think the photo at left answers that question. It comes from the Special Forces Roll of Honour website.
Apart from the photo, this page tells us that Jock was in the Special Air Service Regiment from 1941-45, which means that he must have been with SAS from its very early days – the first operation of L Detachment, Special Air Service Brigade (renamed 1st SAS in September 1942) was in November 1941, a parachute drop in support of Operation Crusader, the operation which relieved the siege of Tobruk.
We are told that his parent unit was the Black Watch (Royal Highland Regiment), and he is listed simply as “Commando (Pte)” in 1941.   He is listed as a Corporal in L Detachment SAS in 1942, then in A Squadron 1 SAS (1942-43), and 2 Troop Special Raiding Squadron (1943) – with which unit he landed behind German lines at Bagnara and was wounded in action during the invasion across the Strait of Messina – and then a member of C Squadron, 1 SAS, 1944-45.
I am still in the market for information about Jock – please post a comment if you have reliable information or can guide me to useful links.
Posted by PAUL BARRATT at 6:03 PM

I don't have any information on Jock's military service, however, I do have a small anecdote relating to him after he retired. In the early 1970's my parents were living at Wamberal on the Central Coast. Jock and his wife were living in the house across the road. Jock's front garden was quite steep and one day when mowing the lawn he slipped and fell. The mower rolled back over his foot and made quite a mess of it as you can imagine. My Mother was the first person to render assistance and, being a trained nurse, was able to stop the considerable flow of blood until an ambulance arrived. It was many months before Jock regained the use of his foot.

reI Married Jocks Daughter by his first marriage. We migrated to Brisbane in 1961 I have always been a great admirer of Jock & his WW2 exploits. He was one of the earliest SAS members. He was in the LRDG prior to the SAS & is in a famous WW2 photo. A group of 3 Jeeps with the LRDG members all dressed in Arab gear on their way out to harass the Germans ,behind there lines. Jock is in the 3rd Jeep. A man I admire tremendously.
Gary Rider. Jock was last living at Tugan on the Gold Coast.

I am the nephew of Jock McDiarmid. I have quite a lot of info on Jock McDiarmid and his wartime exploits, mainly taken from books. He died in May 2009 in Tugun. He never stopped talking about his exploits in WW2 and I only wish I had a tape recorder running during those times. If Gary/Sheila read this can they get in touch with me. Jock's grand daughter in NSW has a lot of info on him and if necessary (and with her permission) I will put you in touch with her.

Thanks for getting in touch - very sorry to hear that Jock is no longer with us; he is one of the most remarkable men I ever met and trekking with him and Des Harrison across the New England gorge country from Armidale to Grafton remains one of the great experiences of my life.

I would be grateful if you could give me any book or other documentary references and I will try to get hold of him. I have "These Men are Dangerous" (school prize!!) from which I extracted the photo in another post (Jock McDiarmid MM C de G) and there is some info about him in that, but my other sources about him are very limited. I would like to gather more material to preserve his memory on this blog, and do a write-up for the display of military memorabilia in the Sandilands Room at The Armidale School.

Love to hear from you too, would very much appreciate any info you have.

Can you let me have your email address. I prefer that method of communication. Meanwhile I will check through the many books I have on the SAS. Many do not mention Jock by name, although he was in the areas portrayed.

You can email me at paulbarratt@ceoadvising.com

Sad to hear of Jocks passing. A real Hero of mine but unfortunately I never really got to know him. I read anything I can on theSAS especially WW11. I as yet haven't found out the details of Jocks MM & C de G, can anyone help provide this info.Regards Gary.

Thanks for getting in touch. For details of the award of MM, please see the 19 May 2010 "Jock McDiarmid's MM Commendation. If you get in touch with me by email at paulbarratt@ceoadvising I can email you a PDF and JPEG of the actual citation, signed by Paddy Mayne and by Generals Alexander, Dempsey and Montgomery.

I do not have any details regarding the award of the Croix de Guerre, and am not sure how to go about finding out.

Your man appears in several episodes of the Blair Mayne bigraphy Rogue Warrior of the SAS by Martin Dillon and Roy Bradford, for which none other than David Stirling wrote the forward.

Thanks. I have some books about Mayne and the SAS operations of that time, and will chase up a copy of this one.

Jock McDiarmid does not get a mention in the book "Rogue Warrior of the SAS" by Martin Dillon. But he is mentioned in the Appendices.

Thanks, Ian, very much appreciated.

My name is Gavin Mortimer, the author of Stirling's Men: the inside history of WW2. I was fortunate enough to interview several soldiers who served with Jock in the SAS, notably Sid Payne, who was his best mate in C Squadron. He and all the other veterans spoke of Jock with the utmost respect and affection. I'm only sorry I was unable to trace Jock when I was researching the book a decade ago. Sid - who is still alive - knew he had emigrated to Oz but had lost touch with him. He would have love to be reunited.
regards

Jock was my uncle , we called him uncle Mac, he was a wonderful man, and when I was over in Oz would visit them lots, auntie Helen , my mothers sister was married to him, he always looked like he was still in the army so smart and straight backed, I loved his humor , well I just loved him, and miss them both , diana , in Norfolk UK

I was present that Wednesday 12th March at the Battalion Parade to honour Sgt. James McDiarmid MM when the French Consul awarded him the Croix De Guerre. He was the acting CSM of "B" Company , 13 National Service Training Battalion. Present was Brigadier Gooch,OBE when Messieurs Strauss addressed the Battalion. The citation read: "For the following cause: Excellent Sub Officer, leader of a parachute section dropped behind enemy lines, on 14th August 1944. After a violent fight, led his section with magnificent spirit and courage to the assault of a German post, himself wiping out the eight surviving Germans. This action merits the Award of the Croix De Guerre and Silver Star." I have a photograph of him holding one of his small children. Quite a warrior.