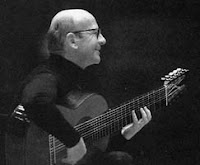 Narciso Yepes (1927-1997) was one of the outstanding classical guitarists of the second half of the twentieth century. His story is closely intertwined with that of Joaquin Rodrigo’s Concierto de Aranjuez – they made each other famous, although each deserved fame independently of the other.

Yepes was born on 14 November 1927 in the village of Marchena, about 7km from Lorca in Murcia Province. His father gave him his first guitar when he was four years old, and he took lessons in Lorca from Jesus Guevara.

On the outbreak of the Spanish Civil War in 1936, the family moved to Valencia. At age 13 he was accepted into the Conservatorio de Valencia, to study harmony, composition and performance with the pianist and composer Vicente Asencio.

On 16 December 1947 he made his Madrid debut, performing the Concierto de Aranjuez with the National Orchestra of Spain under the baton of Ataúlfo Argenta. The performance was an outstanding success, due apparently in no small measure to the conductor, who it seems had taken it upon himself to promote this as yet little known concerto. According to Italian guitarist, composer and writer Angelo Gilardino, Argenta gave the young guitarist a lot of instruction on how the solo part should be played in order to be consistent with his (Argenta’s) interpretation, and “Yepes was humble and intelligent enough to do exactly what Argenta had asked him to do” (Source here).

Soon after this, Yepes went on tour with Argenta; they visited Switzerland, Italy, Germany and France, and the concerto grew in popularity.

In 1950, after performing in Paris, Yepes spent a year studying interpretation under the great Romanian violinist and composer George Enesco (also a powerful influence on Yehudi Menuhin) and the pianist Walter Gieseking, and reportedly had some informal tuition from Nadia Boulanger, one of the great musical educators of the century.

In 1952 a song Yepes had written as a young boy became the theme for Réné Clément’s film Jeux Interdit (Forbidden Games). At the time he represented it as his arrangement of a traditional melody, but he later confessed to being the composer of this lovely little piece.

By the mid-1950s Argenta, a meticulous conductor, had a recording contract with Decca, and at some stage he and Yepes recorded the Concierto de Aranjuez. It is difficult to find out when. The cover notes on my copy of the Decca recording bear a 1959 copyright; this list of Decca SXL recordings dates it to 1958. As Argenta died in a bizarre and tragic accident on 21 January 1958 in the garage of his home at Los Molinos in the Guadarrama Range and was giving live performances of Handel’s Messiah at the time, the recording of Aranjuez can hardly have been later than some time in 1957. 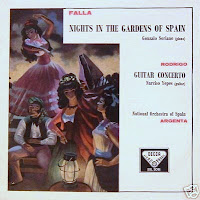 When released (apparently in 1959), it was coupled with Falla’s Nights in the Gardens of Spain with Argenta and the great Spanish pianist Gonzalo Soriano, who specialised in playing Spanish music, an inspired choice – indeed the Falla had top billing on the record cover.

From this time on Yepes and Aranjuez never looked back.

In 1963 Yepes in collaboration with renowned guitar maker José Ramírez developed a ten-string guitar. The four additional strings were tuned to C, A#, G#, F#, which resulted in the first guitar with truly chromatic string resonance - similar to that of the piano with its sustain/pedal mechanism. He gave this guitar its first outing in 1964, in a performance of the Concierto de Aranjuez with the Berlin Philharmonic, and from that time on he used that instrument exclusively. I had the pleasure of hearing him in a solo recital in Canberra, an ABC Concert on 5 June 1976.

Yepes has recorded Aranjuez several times since that 1950s Decca recording, but that original recording is clearly the best. It is his best performance of the beautiful second movement, Argenta’s conducting leaves the others for dead, and it is one of those great examples of soloist and conductor being completely at one in the performance and interpretation of the work.

And I know of no better performance of Nights in the Gardens of Spain than the Soriano-Argenta version which goes with it, although the later recording with Argenta’s successor at the National Orchestra of Spain, Rafael Frühbeck de Burgos, is also first class.

Unfortunately this record has not been re-released on CD (nor on iTunes!), so if you see the vinyl in good condition, grab it. Someone was offering one on eBAY when I looked half an hour ago and wanted the bidding to start at £50. For those who are interested to track it down, it is Decca recording SXL-2091.