Defence: off-the-shelf is not just about jobs

One of the key elements of the Government’s cost saving program for Defence is the hardy perennial that we should do more off the shelf purchasing – instead of having materiel that is especially designed for our needs, we should as far as possible purchase items that are already in production and available off the shelf – ready-to-wear rather than bespoke tailoring, so to speak.

This sounds fine in theory and where possible it should be the practice. There are, however, one or two catches. The first is the one identified by the Australian Industry Group’s Defence Council, as reported by defence writer John Kerin in today’s Australian Financial Review:

[The Council] warned that Rudd government moves to buy more overseas sourced and off-the-shelf equipment in a bid to slash costs on the program, if overdone, could cost jobs in the 29,000 strong defence sector.

That is true, and is an important issue. Perhaps more important is the related issue of maintaining the industrial capacity to sustain our defence equipment in times of conflict, and in peacetime to modify and upgrade it, both to improve its performance and to ensure that it remains capable of dealing with emerging counter-measures. To do that we need a diversified and profitable domestic defence industry – not necessarily Australian owned, but certainly located here.

Perhaps most important of all is ensuring that the materiel we buy is genuinely fit for purpose, and in this regard overseas equipment will not always make the cut. Submarines are a classic case – diesel electric submarines are normally designed for short patrols in deep cold water, we want ours to do very long range patrols in warm shallow water.

Another example would be the Infantry Mobility Vehicle (IMV), for which Australia uses the Australian designed Bendigo manufactured Bushmaster vehicle. Perhaps it would have been cheaper to buy US Humvees off the shelf? It depends what you mean by cheap. The Bushmaster was designed for high levels of crew and passenger protection. It has a shaped, armoured hull, which deflects the blast from the equivalent of a 9.5kg high-explosive land mine detonated under any wheel or under the centre section of the vehicle. As a consequence, Australian forces serving in Iraq and Afghanistan have suffered very low numbers of casualties resulting from land-mines and improvised explosive devices (IEDS). Because this level of protection was designed into the vehicle from the outset, they are taken into account in designing the vehicle for its acceleration, braking and rollover characteristics. They have proved themselves so well that we have sold them to our Dutch allies in for use in Oruzgan Province.

Humvees on the other hand were initially designed as thin-skinned vehicles to provide mobility behind the front lines. In urban and counter-insurgency situations they proved something of a disaster. After the “Blackhawk Down” incident at Mogadishu the M114 version was developed to provide protection against small arms fire, but it remained thin skinned underneath. “Up-armour” kits were provided for the older M998 version, but not in great numbers. After the invasion of Iraq in 2003 US troops began use scrap materials to improvise additional protection (“hillbilly armour” or “farmer armour”), but the extra weight compromised the handling characteristics and service life of the vehicle. The Americans are now in the process of a full-scale program to produce Mine Resistant Ambush Protected (MRAP) vehicles, but meanwhile they have suffered very high rates of casualties from mines and IEDs – over 60% of casualties in Iraq and 75% of casualties in Afghanistan. Many a grieving US parent would derive little comfort from knowing that the outcome might have been very different if their son or daughter had been in a Bushmaster.

I remember a US Congressional Committee in the early 1970s agonising about the fact that the last 50% of the cost of major military development projects went on the last 5% of performance. The trick is that the people who take that equipment into harm’s way tend to place a very high value on that last 5% of performance. My supervisor at the time had been a bomber pilot in New Guinea. He used to say to me, “I’ve been to war in the second best aircraft in the sky. It is not a lot of fun”.

The decision to buy “off-the-shelf” is not a simple one, and I do not think we will see it used nearly as extensively as the Government might hope.

Posted by PAUL BARRATT at 3:56 PM No comments:

When politicians say “We’ll never forget you”, it is time to start counting the silver. Politicians have intoned words to this effect about those who have served in all the wars since the 1885 campaign in the Sudan.

The Australian War Memorial in Canberra is intended to be the national public expression of that remembrance, not only of those killed in war but of all of those who have served the nation in time of peril. But as the current controversy about the need to find commercial sponsorship of the playing of the Last Post indicates, the eternal gratitude of our political leaders does not extend to actually paying for the remembrance of our soldiers, sailors and airmen and women.

It is not just the Last Post; that is just the latest example. Many of the exhibitions in the Museum also have commercial sponsors, and this has been going on for a long time.

One would have thought that the kind of remembrance that the national war memorial represents would be considered a small but important part of the core business of the national government of any self-respecting nation. Regrettably our political leaders have far more important things to spend our money on, like bribing voters in marginal electorates and spending money in ways they think will make them popular. The Howard Government was able to find $8 million for the Western Bulldogs AFL club and the Rudd Government was able to find $4.5 million for the redevelopment of the Carlton Football Club’s facilities (see Commonwealth Grant for Carlton Football Club).

Perhaps it would be more appropriate to give that sort of money to the national war memorial and leave it to the football clubs to find the commercial sponsorships. Let’s get the corporate logos out of the War Memorial.

This scrounging for commercial sponsorship is a sad contrast to the faithfulness of the evening ceremony which takes place at the Menin Gate in Ypres, the gateway to the Ypres Salient battlefields, at 8.00 pm every day. Every evening the Gate, a busy thoroughfare, is closed to traffic while buglers of the local volunteer fire brigade play the Last Post in a moving ceremony which is an expression of the Belgian nation’s gratitude to the British and Commonwealth troops who fought for their freedom and independence in World War I.

This ceremony began with the inauguration of the Menin Gate Memorial in 1928 and continued for about four months. From 11 November 1929 it has taken place every day, in all weathers, with the exception of the period of the German Occupation, from 20 May 1940 to 6 September 1944. On the very evening that Polish forces liberated Ypres the ceremony was resumed at the Menin Gate, in spite of the heavy fighting still going on in other parts of the town.

Somehow after ninety years the good citizens of Ypres still manage to remember our brave lads without the need for commercial sponsorship.

Posted by PAUL BARRATT at 11:14 AM No comments:

I am now able to show some pictures from the opening of the exhibition by Newcastle’s NBN News presenter Ray Dinneen, a long time admirer of Harry’s work. 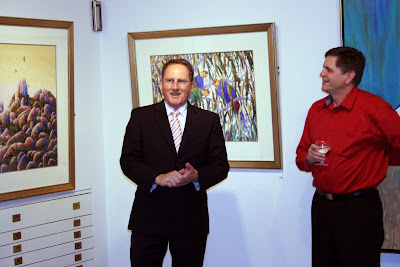 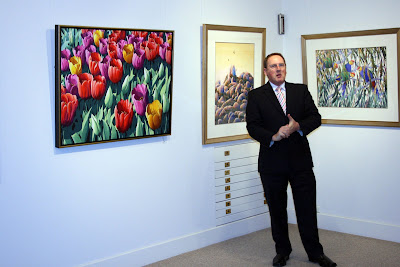 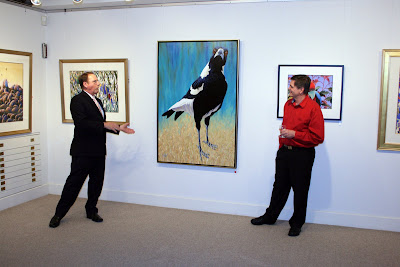 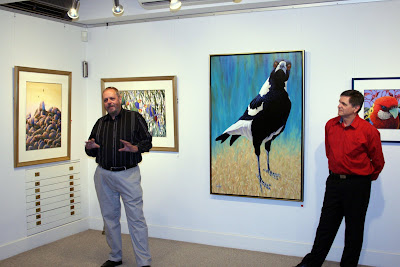 Harry responds, watched by Mark and a third party 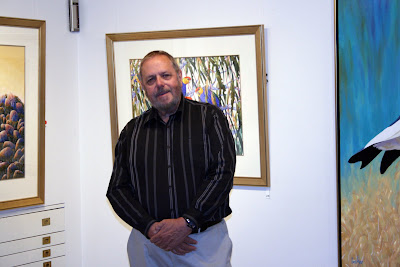 Posted by PAUL BARRATT at 9:34 PM No comments: