People with a stereotyped image of Islamic societies might be surprised to hear that Turkey has long had a vigorous popular music scene, led by some outstanding female stars.

I got an inkling of this when I went to Istanbul in 1977 as an Australian delegate to the World Energy Conference’s quadrennial meeting. One evening I saw some very presentable local 1970s music played in one of the hotels by a live band with a female vocalist.

A day or two later I decided during one particularly tedious session that staying until the end thereof was not likely to make a better person of me but a long walk through the streets of Istanbul might.

Good thinking. I exited the Atatürk Cultural Centre and headed off. I soon found myself walking in a very dimly lit shopping street; Turkey was in the grip of a balance of payments crisis, and was behind in its payments to Bulgaria for bulk electricity. The Bulgarians had cut their supplies right back, and blocks of the city were being blacked out in sequence for two hours at a time. The shopkeepers’ response to this was to start up an auxiliary generator and run about one fluorescent light per shop.

I entered a record shop and told the proprietor I would like to buy a recording of Turkey’s leading female popular singer – whom would he recommend? 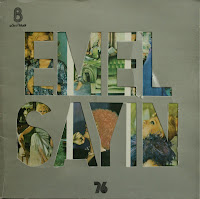 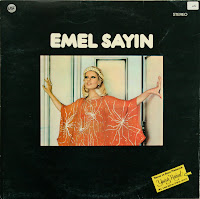 He had the proper retailing spirit and produced two LPs, one of Emel Sayın (Emel Sayın 76), and one of Neşe Karaböcek (Dünden Bugüne, released in 1977). The former he said was the big seller of the moment, the latter rising rapidly in the charts. I took them both.

My verdict: Neşe was good, no doubt about it, but Emel was truly great. This is a woman with a very strong voice, good voice control and amazingly clear diction – a product of serious musical education and voice training. She had a substantial career in Turkish movies as well, from 1970 to 1980. She was one of the stars of a genuinely Turkish genre of popular music, which emerged in the 1970s to dominate a pop music scene which had progressed from cover versions of Western songs, to new Turkish lyrics to Western songs, to a new “Arabesk” indigenous style of which Emel was a leading exponent.

career also tracked the emergence of new media – she went from success in an open ‘Voice of the Queen’ competition run by Hurriet News Agency to her first casino appearance at age 17, then seven years of live onstage performances with Ankara Radio, followed by Istanbul Radio, and by the start of the 1970s her first LPs were beginning to appear – often in the early 1970s in the form of annual albums like the abovementioned Emel Sayın 76.

A couple of years after making this discovery I found myself in a Turkish area of Frankfurt and saw in a shop window a handful of Turkish audio cassettes, with an indication that these could be obtained from a shop on the fourth floor. I climbed into a creaky old lift with its classic steel mesh concertina door, and emerged into a shop which sold a great array of Turkish bric-a-brac including a number of audio cassettes. No-one seemed to speak any English, so I simply selected four cassettes and purchased them. Not a bad hit rate, I thought: three performers who were quite enjoyable (Serap Mutlu, Sevda Deniz and Biricik) and one megastar, the amazing Sezen Aksu, singer, songwriter and producer who sold over 40 million albums worldwide. Although like Emel Sayın she had a classical Turkish musical training, Sezen Aksu sings in a style closer to Western popular music, starting her career with the cover versions of Western songs, and then original compositions in the Western style, known as “arrangements” (Arajmanlar). As a songwriter, composer and performer she churned out hit after hit, and is one of the most celebrated Turkish pop stars of all time. 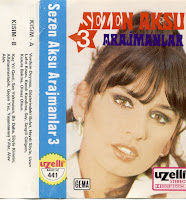 happened the audio tape I purchased, Arajmanlar 3, contained the two sides of the hit single Olmaz Olsun/Vurdumduymaz (Wish it never happened/Insensitive) that first took her to number 1 in the charts in 1976, after which her career never looked back.

She helped others to fame as well, penning for pop singer Tarkan the songs Simarik and Sikidim with which he topped the charts in several European countries – without singing in English. Sertab Erener, another protégée of Aksu, won the Eurovision Song Contest in 2003.

On 7 October 2007 she gave a concert at the Royal Albert Hall, London, only the second Turkish pop singer to do so. The asking price for the best tickets in this 5,000 seat hall was £80 per head. Restricted view Circle tickets £35.

Fortunately it is no longer necessary to journey to Istanbul or Turkish neighbourhoods of Frankfurt and acquire vinyl records or audio tapes of indifferent manufacturing quality in order to hear these wonderful singers – all you have to do is go to the iTunes store and know what to look for.

If you put “Emel” into the search engine it will return Emel Sayın at the top of the list, and by selecting that you will be given the choice of six albums downloadable for $16.99 each. I have downloaded Emel Sayın 2: Turki Filmi Musiki and it is well up to standard. As it happens it has four tracks from the original Emel Sayın 76 I purchased all those years ago, any one of which I can recommend:

So now I can hear them in better sound quality than ever. If you feel like giving it a try, don’t bother with the 30-second grabs, they don’t do justice to this music; lash out and buy a track or two (e.g. the first and last of the above – if after a few hearings you don’t like them then maybe this music is not for you), or better still download the whole album.

Unfortunately there is nothing from Sezen Aksu’s brilliant career that goes back to Arajmanlar 3, which has some truly wonderful songs on it – the haunting Allahaısmarladık (Goodbye), or the passionate Yaşanmamış Yıllar - but there is plenty to choose from on iTunes.