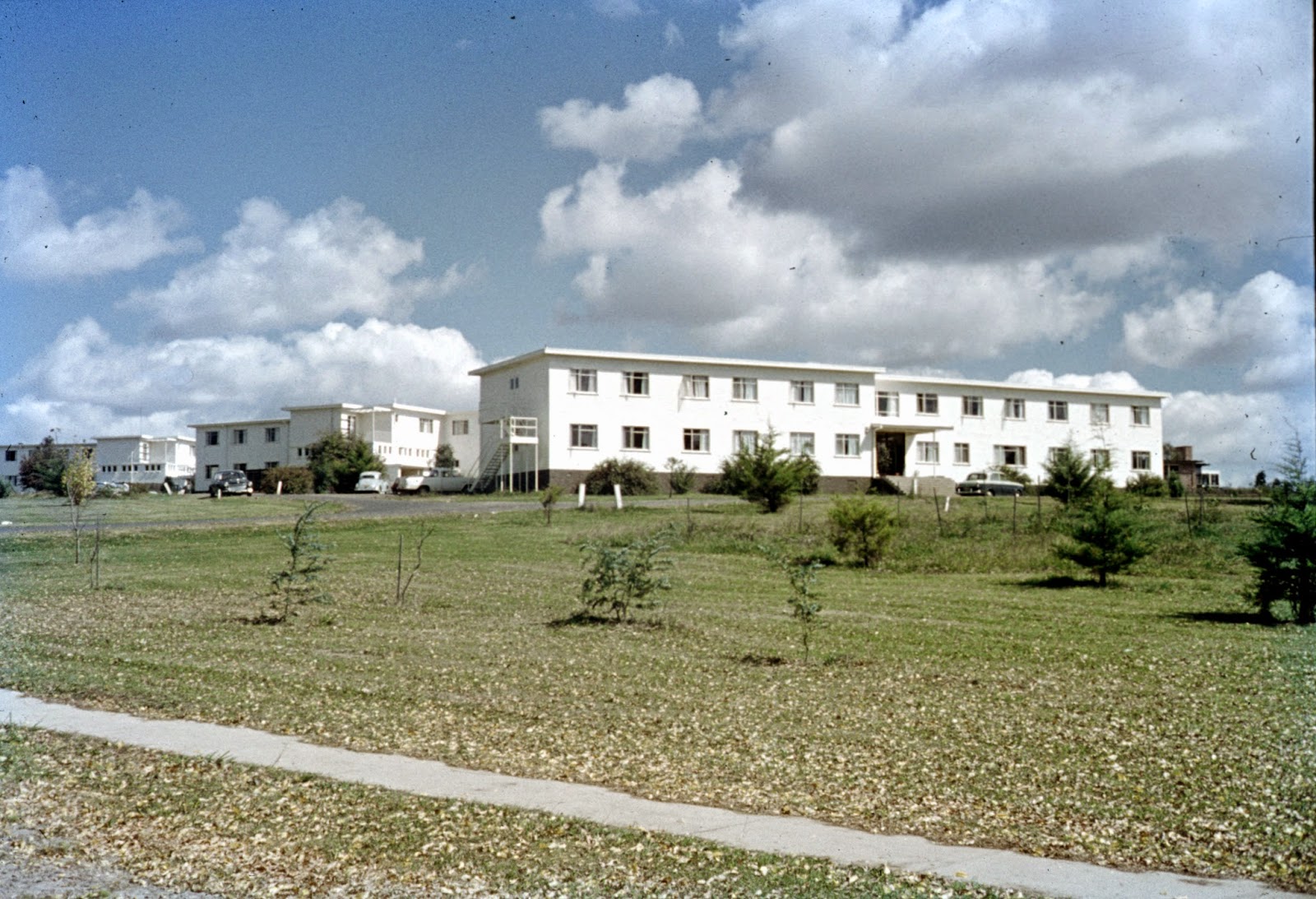 Wright College was the first men’s college to be opened at the University of New England. It was established in 1958, in temporary buildings, and I was a member of the College throughout my university days, from 1961-65. When the original wooden structures reached the end of their lives in 1996, there was no money to replace them and they were bulldozed, to the grief of large numbers of alumni.

There has now been a miraculous resurrection, and I had the honour of speaking on behalf of the alumni at the official opening ceremony this morning.  Thius is what I said:

As an alumnus of the original Wright College and a graduate of the University of New England it gives me great pleasure to have the opportunity to say a few words on this auspicious occasion.

I will use this opportunity to pay a couple of tributes and to address a couple of remarks to the current residents, students and staff.

My first tribute is to the man that this College honours, Phillip Arundell Wright, known affectionately to all as “P.A.” This remarkable man played an important role in the University’s creation, and was one of its great benefactors: when the White family donated Booloominbah and about 70 acres of land, P.A. donated land around the University, including Laureldale on the other side of Booloominbah, which became the University Farm, land along the creek flats, which became the Consett Davis Playing Fields, and the land upon which we stand. He also donated that magnificent mace which the Esquire Bedell carries before the Vice-Chancellor on academic occasions. I would urge all of you to Google him; right at the top of the list you will see the Australian Dictionary of Biography entry, which will enable you to get the measure of the man in a very few minutes. For those who want more, Judith Wright’s Generations of Men would be a good place to start, and there is a fine portrait of him by Archibald Prize-winning artist W.E. Pidgeon over in the Wright Centre.

My second tribute is to my father, and to his generation of staff and students who worked so hard to build the university we know and love. My father was one of that first group of 24 students who enrolled in the New England University College in its commencement year. He returned as a staff member immediately after World War II, and when the University became an autonomous institution in 1954 he was elected to the University Council.

One of the big things he had taken out of his time at NEUC was the value of the personal relationship between staff and students that has become the hallmark of this university and is one of its great strengths.

So when he and his colleagues of that time had the opportunity to shape the new institution, my father, like many others, was a committed believer in the idea that the new University of New England should be a residential university. So committed was he to this idea that on his modest academic’s salary he offered me the opportunity to live in Wright College, about 400 metres from our home over the way in Handel Street. This was an opportunity that I gladly took up and for which I have been forever grateful.

My third tribute is to the many staff who over the years have laboured successfully to keep our college system going, no easy task when the higher education authorities have never exhibited much warmth toward those trying to do something new or different, nor any understanding of the particular circumstances of regional universities. I especially thank those who have surmounted all the obstacles to breathing new life into our beloved Wright College.

To the current residents, staff and students, I would say only that this is your Wright College now, and you must make of it what you will. It will not be the same as Wright College Mark I, nor does it need to be – times are different now. I guess for the many of us watching sympathetically and perhaps anxiously from the sidelines, our measure of your success will be the extent to which members of the student body decide that Wright College is to be your home while you are at UNE, and becomes a central feature of your memories of your time here.

In closing, I would just say that while it is your Wright College, I hope you will manage to feel that you are part of something which in a very direct sense began in the 1950s, and which draws a straight line back to the 1930s when an enlightened group of prominent citizens, many of them without much formal education, succeeded against extraordinary odds in establishing the first university in regional Australia. 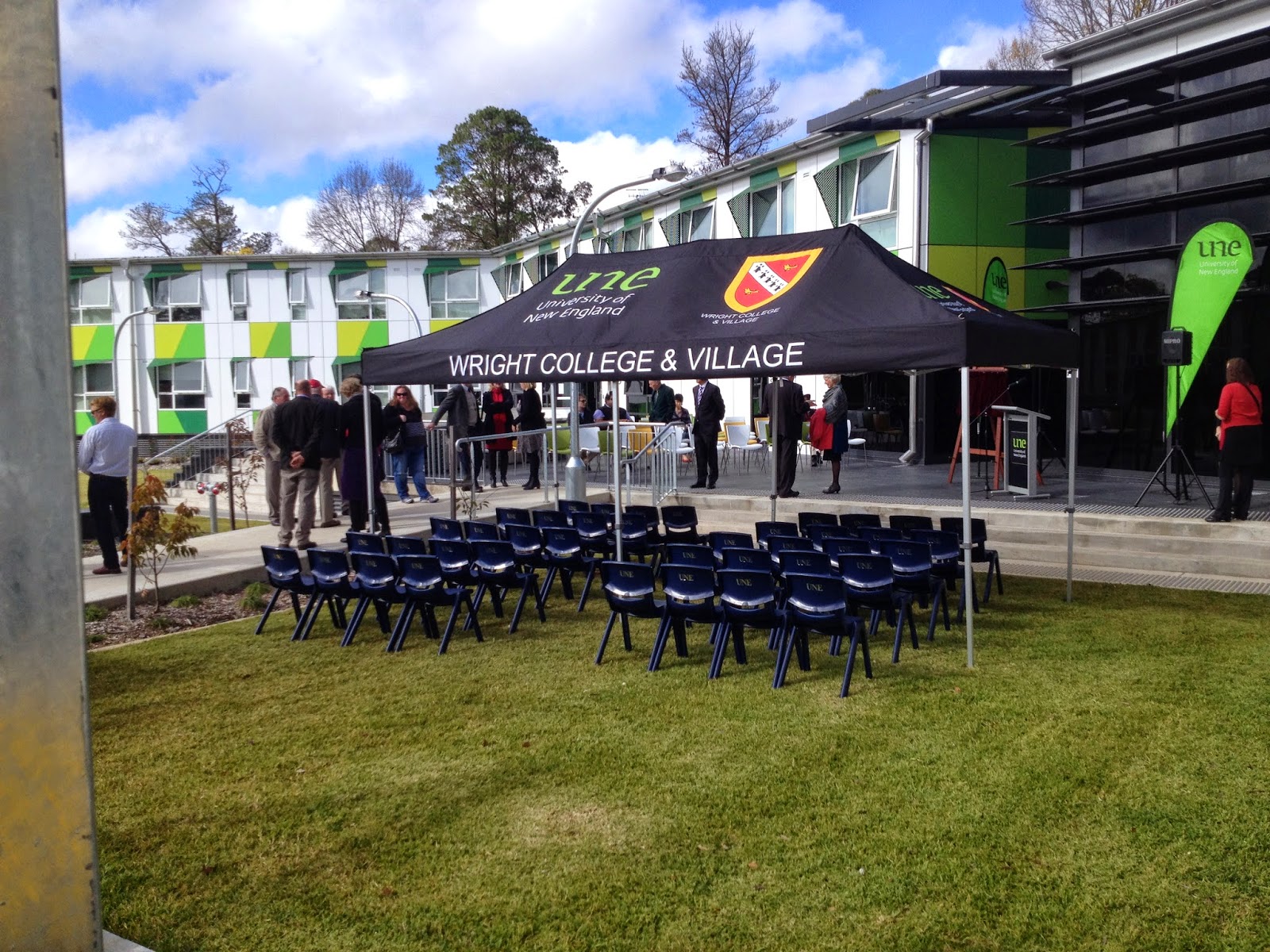 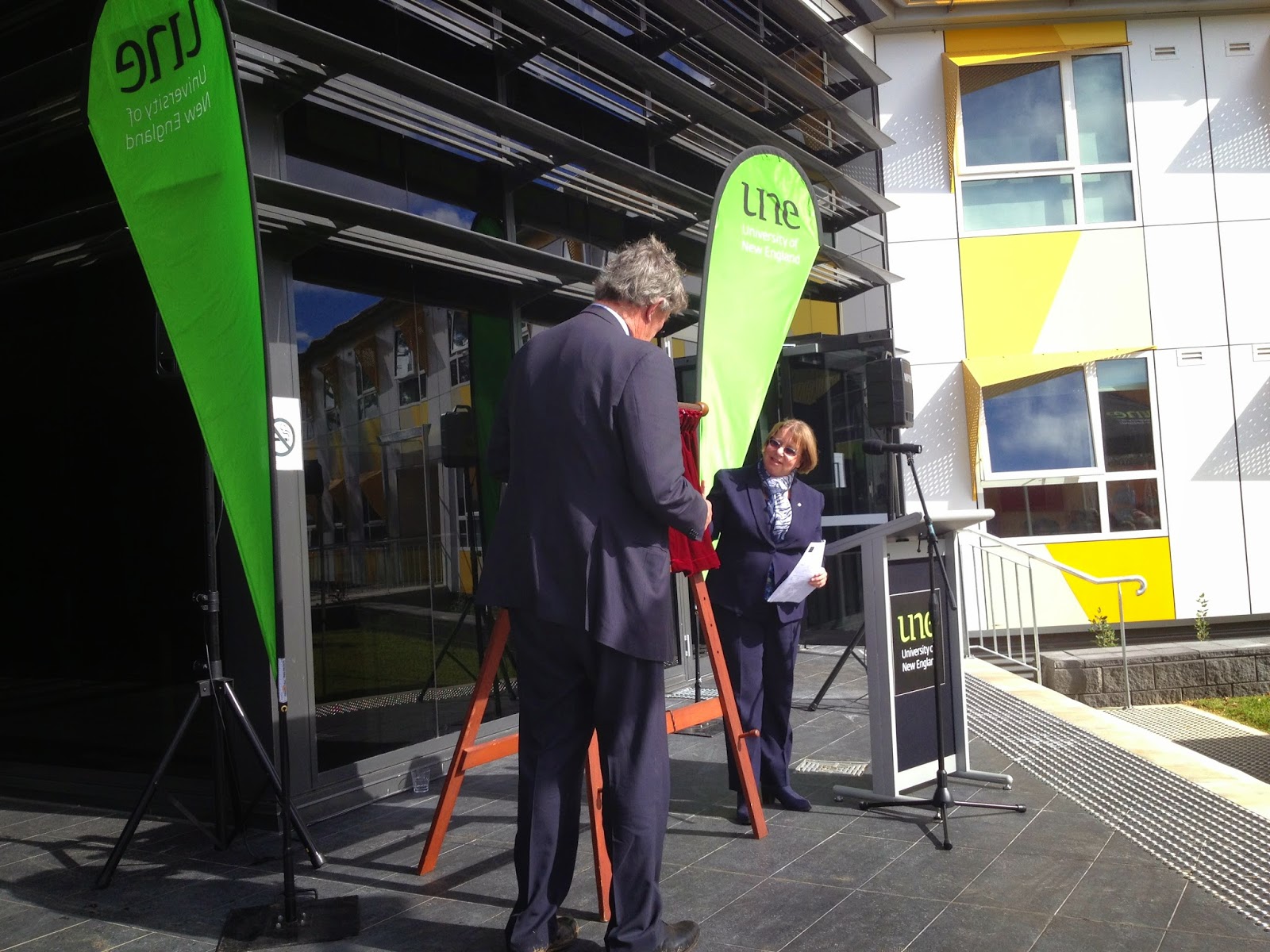 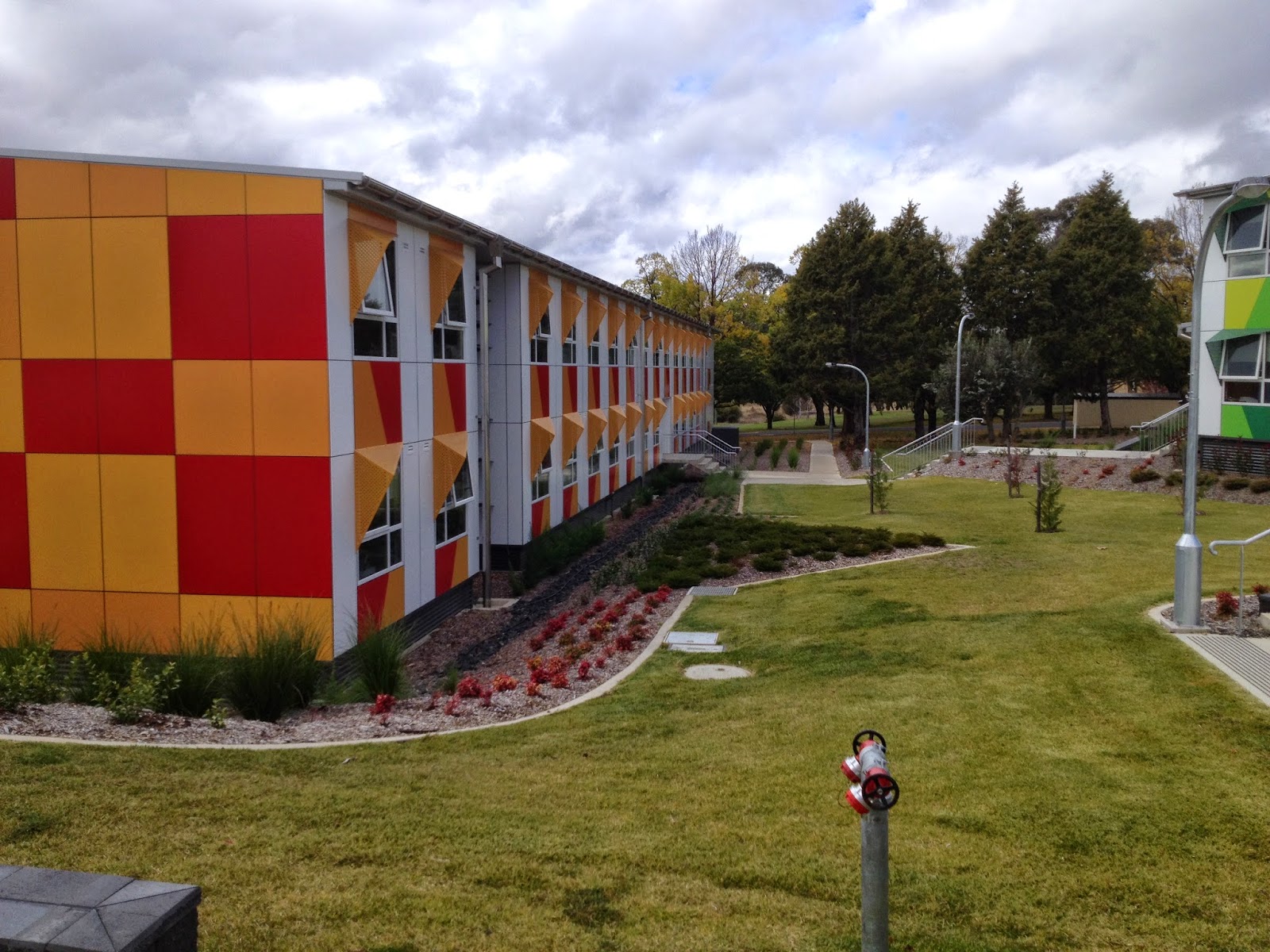 A view of one of the buildings –
in the colours of the original Wright College crest
Posted by PAUL BARRATT at 9:49 PM