On Thursday 16 August 2012 I attended the launch, in a Committee Room in Parliament House, Canberra, of a campaign by the Iraq War Inquiry Group (IWIG), of which I am a member, for an inquiry into how Australia came to participate in the invasion of Iraq.

The meeting was hosted by the courageous Mellisa Parke, ALP Member for Fremantle, Senator Scott Ludlam (Greens, WA) and and the Member for Denison, Andrew Wilkie MP (Independent), who readers will recall resigned his post in the Office of National Assessements shortly before the invasion on the grounds of what he saw as the misuse of intelligence reporting by the Government.

The launch of an issues paper prepared by IWIG members, which can be found at our website www.iraqwarinquiry.org.au, was undertaken by former Prime Minister the Right Honourable Malcolm Fraser AC CH. An extract from an SBS Radio feature piece on the campaign, containing some of Mr Fraser’s remarks at the launch, and from a prior telephone interview with me, can be downloaded from here. An extract from an interview with Senator Ludlam can be downloaded from here.

For me there are two sets of issues to be addressed by any inquiry: issues specific to the circumstances of the lead-up to the invasion and the decision to commit; and an analysis of the lessons to be learned from that process to ensure we put in place a more robust process for making that most important of decisions – whether or not to send the Australian Defence Force to war or to involve it in warlike activity.

Regarding the first matter, in Rushing willingly into Iraq, one of my first posts when I commenced blogging on Australian Observer back in February 2009, I wrote:

As most of us celebrate the setting of a deadline for the withdrawal of American troops from Iraq, we should not allow ourselves to be distracted from the important question of how we all came to be involved in this mess in the first place. The most important questions here revolve not around the questions relating to whether Saddam Hussein’s Iraq did or did not have weapons of mass destruction (WMD), but whether our governments were completely open with us about what they knew and when, at what stage various decisions were taken and commitments given, when we became irreversibly committed to the invasion of another country, and whether this was all some kind of ghastly “intelligence failure”.

Specific questions the Iraq War Inquiry Group would like to see addressed by a suitably authorised and empowered inquiry include:

According to the intelligence inquiries in Australia that followed the 2003 Iraq war, views diverged between ONA and DIO concerning the nature of the evidence for the possession by Iraq of WMD. We need to know:

•    What was the Australian intelligence advice given to the government in the lead-up to the war and how was the divergence of views between the two assessment agencies reconciled?

•     Was the intelligence advice challenged at the time by any members of the government, and if so by whom?

•     What was the nature of the challenges, what was the response by the assessment agencies and how were doubts resolved?

•     Was the intelligence given to the government restricted to advice on the possession by Iraq of WMD, or was wider advice also provided on whether Iraq posed an actual threat? If there was a threat assessment, what did it say?

•     Philip Flood, who conducted a post-war inquiry into Australian intelligence, described the evidence on Iraq’s WMD as ‘thin, ambiguous, and incomplete’. How does Mr Howard reconcile this with his presentation to parliament on 4 February 2003?

•     Were any UN, NGO or other reports of the effects of the 1991 Gulf War, the economic sanctions and the likely effects of a further war considered in the government’s decision to go to war in 2003? If not, why not? If so, which reports, and how much weight was given to them?

•     Were any contingency plans made by the government to help reduce and deal with the predicted enormous humanitarian effects of the war?

•     Why did the Australian government change its acceptance of the compulsory jurisdiction of the International Court of Justice when it did? Was its response in parliament on the war misleading?

•     Why did the prime minister fail to bring the decision to go to war to the Federal Executive Council as he had told the governor-general he would?

On the question of how to provide for a more robust process of decision making, the current system, under which it is the right of the Executive, rather than the Parliament, to decide to send troops to war is in the Australian constitutional context a legacy of the Royal Prerogative, which in turn has its roots in the pre-democratic notion that the power to make war is an attribute of the sovereign rather than of the people.  In the globalised world of the 21st century, and in any society founded on the belief that power flows from the people to the state rather than from the state to the people, it is both an anachronism and an anomaly.

By having the power to decide in the hands of too few people it also leaves the Australian community exposed to serious risks, due to the fact that in practice the Prime Minister him/herself, with or without the advice and consent of his/her colleagues and their departmental advisers, can commit Australian forces to war or warlike operations in circumstances short of a direct attack on Australia’s homeland. These risks include misleading, overstated or over-certain claims to the Australian Parliament and people, patently absurd claims of self defence against a real and imminent threat to Australia, a lack of clarity as to what the mission is and what success would look like, and vexed questions of UN authority, a source of legitimacy with which Australian people are comfortable, and of legality in relation both to customary international law and to the provisions of the Charter of the United Nations.

I think that the solution to this, one which I hope would emerge from any inquiry into how we came to be involved in the Iraq War, is to transfer the decision making power from the Executive to the Parliament.

On 13 February 2008 Senator Ludlam introduced a Private Members’ Bill to limit the prerogative power of the Executive to commit Australian forces to overseas service without the consent of the Parliament. The provisions of the Bill are outlined in War Powers Bill.

My colleagues Andrew Farran, Garry Woodard and I made a joint submission in support of Senator Ludlam’s Bill, which I can no longer find on the Parliament House website. The contents of our submission will have to be the subject of a later post.

Unfortunately the major parties gave Senator Ludlam’s Bill short shrift, a matter I dealt with in some detail in War Powers Bill crushed by major parties. Perhaps a careful look at how we committed to the invasion of Iraq will encourage them to take the matter more seriously, but I fear that both the major parties are much too comfortable with the current arrangements.
Posted by PAUL BARRATT at 5:57 PM No comments:

In May 1999 I accompanied Defence Minister John Moore on an official visit to China, Korea and Japan. Others in the party included Vice Chief of the Defence Force Air Marshall Doug Riding, and Head of the Strategic and International Policy Division Allan Behm, now Chief of Staff to Greg Combet, Minister for Climate Change and Energy Efficiency.

The trip was a bit of a nightmare, but it produced a few passable photographs.

One of the early items on the itinerary was a visit to Shanghai Naval Squadron, where the Minister inspected the Guard of Honour and we went on board a vessel that was in port: 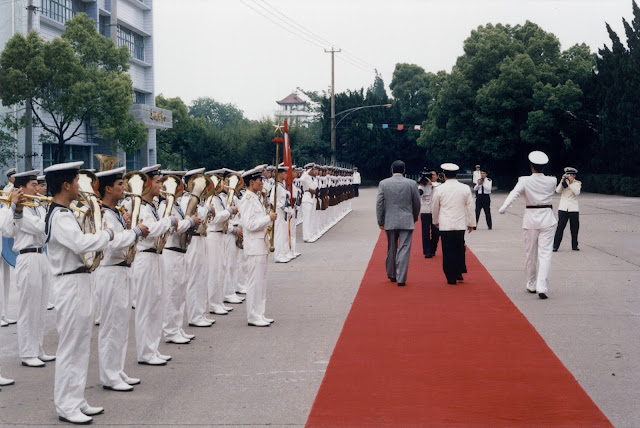 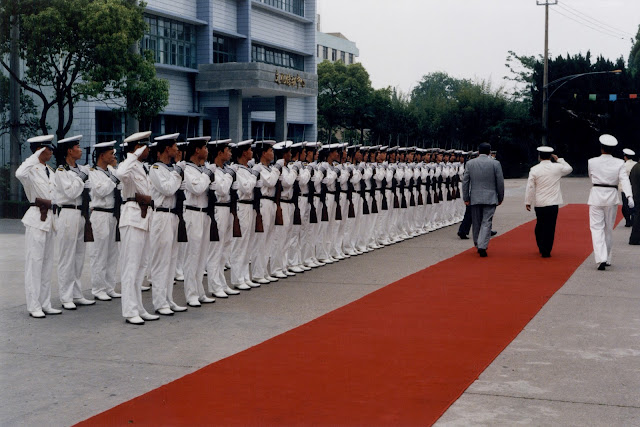 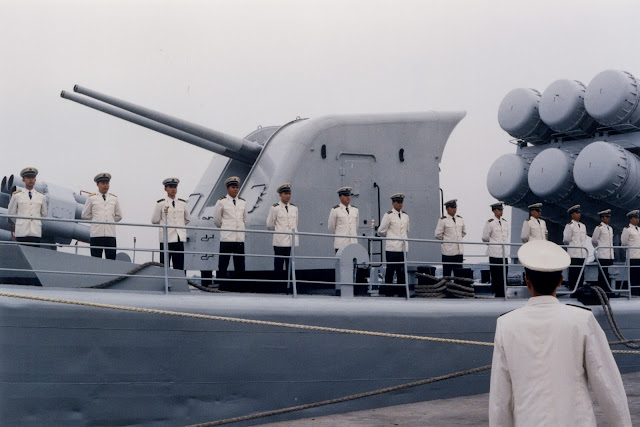 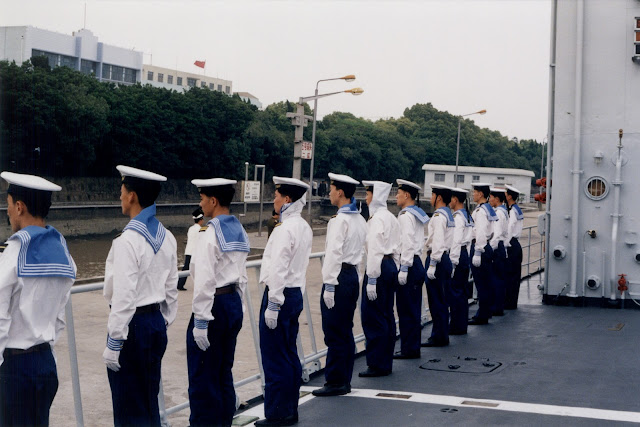 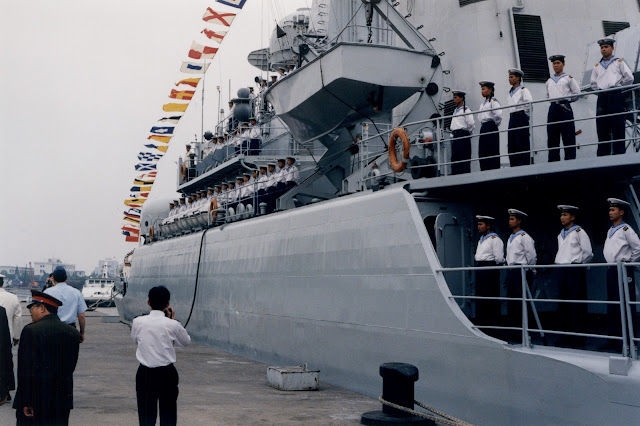