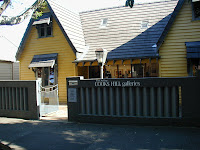 From 18 September – 12 October Mark Widdup’s delightful Cooks Hill Galleries in Newcastle will be the scene of a one-man exhibition by leading Australian watercolour artist Harry Pidgeon.

I have known Harry for quite some time. After a stint at the pre-school run by the charming Misses Cooper in the big old house that had been the home of their father, the Rt Rev Henry Edward Cooper, the last Anglican Bishop of Grafton and Armidale, 1901-14, in 1949 we were enrolled in Kindergarten at the Armidale Demonstration School, now imaginatively entitled the Armidale City Public School. 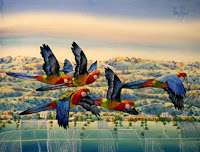 Throughout our time at “the Dem School” we had a weekly two-hour art period in which there was no pretence of teaching us anything about technique but we were given a couple of hours for artistic self-expression.


In the infants section of the school (Kindergarten to Second Class), self expression was limited to finger painting. Harry’s finger painting was definitely of a better stamp than that produced by the rest of us, of a different order altogether.

By the time we were in Third Class and were now allowed to attack the cartridge paper with brushes and watercolours, Harry had draughtsmanship, perspective and light and shade pretty well licked, so art periods for most of us became a form of entertainment in which we pursued our own immature daubings while we waited to see what Harry would come up with this time.

In those days the Demonstration School was, as its name implied, closely connected with the Armidale Teachers’ College about three blocks up the hill. The Teachers’ College had the wonderful Australian impressionist paintings of its Howard Hinton Bequest hanging on the walls in its corridors, and we were taken from time to time to see them. I think we grew up thinking it natural for there to be paintings by the likes of Arthur Streeton, Tom Roberts, Elioth Gruner, Han Heyssen and Norman Lindsay hanging on the walls.

In due course our primary school days came to an end and we entered The Armidale School as two of its very small number of dayboys (Alex Buzo was another dayboy classmate – see The Alex Buzo Company). After many adventures and formative experiences we completed the New South Wales Leaving Certificate in 1960 and went our separate ways.

Harry went off to the National Art School in Sydney, graduating in 1965, after which he became Art Director at advertising agency The J. Walter Thompson Company Pty Ltd (1966-79). After a short period running his late father’s newsagency in Armidale, in 1980 Harry embarked on a full time career as an artist, working in watercolour, gouache and oils.

Harry's works are held in many collections including British Royal, Australian Vice- Regal, Australian Government, Regional Art Galleries and corporate and private collections throughout the world. His work is referenced in art encyclopedias and indexes in Australia and USA, and numerous magazine and newspaper articles have been written about him in Australia.

We are fortunate that Mark Widdup is a very systematic person who keeps files of past exhibitions on the Cooks Hill Galleries website. The 2003 exhibition can be found here, and the 2006 exhibition, from which the paintings in this post were selected, can be found here.

If you live anywhere within a bull’s roar of Newcastle, don’t miss this one. 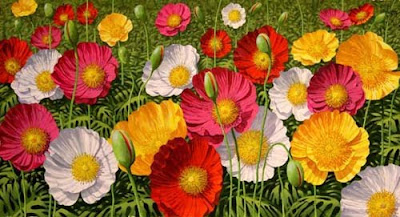