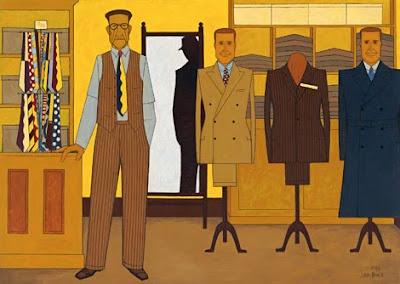 John Brack concentrated on painting, in his very personal and recognisable style, familiar scenes from everyday life. His approach is summed up in a letter he wrote to Eric Westbrook, Director, National Gallery of Victoria dated 15 April 1956:

If I choose to paint the life I see around me, it is because I find people more interesting than things. So it seems to me a worthwhile object to attempt to re-unite subject and design. This involves a certain conscious discipline, which may not be a bad thing at this time.

In the online promotional material for the exhibition NGV says of his art:

His was an art of ideas that aimed to speak directly to the viewer. It was grounded in the everyday but communicated through a distinctive and highly personal language incorporating complex visual analogy, irony, humour, a sophisticated use of metaphor, and always underpinned by a deep knowledge of the history of art.

More than any other artist of his generation, John Brack was a painter of modern Australian life. Unlike his contemporaries, Brack painted neither myth nor history and when he focused on the landscape, it was the sprawl of suburbia that caught his attention rather than the ubiquitous Australian bush.

A good way to get a feel for this great Australian artist’s work is to visit the online Education Resource page here. This gives the opportunity to download an education resource in PDF format, which may be accessed directly here, or to go to the image bank which contains in zoomable format all of the images contained in the education resource.