In preparation for a holiday in France in January last year I searched online for one nights’s accommodation in Lyon, preferably within walking distance of Place Bellecour, the heart of the city. For some reason a lot of the accommodation was fully booked and what little was available was either not particularly conveniently located or fiercely expensive or both.
I then turned to the trusty Logis de France website (English language version here) to see what might be available in nearby villages.  I came across something that looked acceptable in a village called Chaponost. Google Maps told me that the time from the Logis to Place Bellecour was about 25 minutes, so I booked it.
I subsequently discovered that Chaponost is the site of one of the largest Gallo-Roman remains in France – a massive aqueduct that transported water from the Gier River to Lugdunum, the site of the modern city of Lyon at the junction of the Rhône and the Saone.
This turned out to be an excellent option. The Logis was clean and comfortable, we could park in the establishment’s yard at no cost, and the journey time to Place Bellecour was exactly as Google Maps had predicted. So after spending the day motoring down from Lyons, we checked in, rang the Restaurant Raphaël Béringer (see Restaurant Raphaël Béringer, Lyon), to be told that they were full but if we would come early they would fit us in, had a shower, motored off to the Presqu’île area of central Lyon, drove around the block a few times in the rain until we found a parking space, had a delightful meal, and returned to Chaponost.
The next morning we awoke in sparkling sunshine, a few hundred metres from the aqueducs romains du Gier, and spent a pleasant hour inspecting the ruins before motoring off to spend the rest of the day in Lyon. 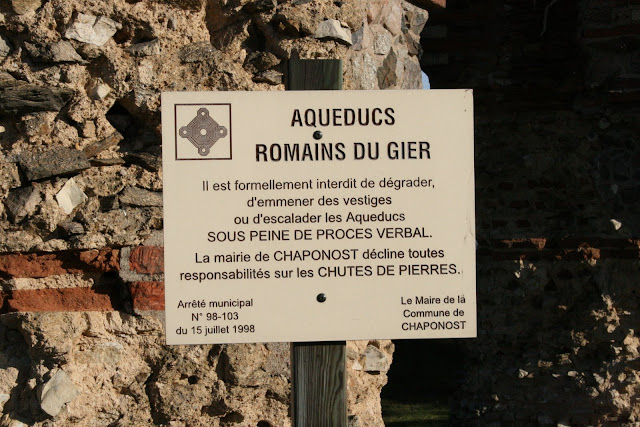