I am indebted to the following tweet from the Australian War Memorial in Canberra for reminding me that today is the 70th anniversary of the loss with all hands of the corvette HMAS Armidale.

1/12/12 11:10 AM
#OnThisDay 1942: HMAS Armidale was sunk by Japanese aircraft. Teddy Sheean fired at attacking bombers until he was lost with his ship.

HMAS Armidale was one of 60 Bathurst Class corvettes constructed for the Royal Australian Navy during World War II.

In late November 1942, the RAN was called on to evacuate the commandos of the 2/2nd Independent Company, a contingent of Dutch troops, and over 100 Portuguese civilians, while delivering a relief contingent of Royal Netherlands East Indies Army and Australian soldiers. Armidale  was one of the ships assigned to the operation, together with her sister ship Castlemaine.

The corvettes sailed from Darwin at midday on 29 November, leaving just as Japanese aircraft flew over the harbour. At 09:00 on 30 November, the two ships were located by a Japanese reconnaissance plane, but were unable to shoot it down. Because of the likelihood of attack during the day and the distance from the destination, the ships radioed Darwin and suggested that the mission be aborted, but they were instructed to continue after steering away from their intended destination for an hour, and promised fighter support. Armidale  and  Castlemaine were attacked at midday by 14 Japanese bombers, but these were driven off by a force of Bristol Beaufighters, which then returned to Australia. Another attack came at 14:00, but neither side was able to do damage.

These actions and other events disrupted the operation and it was attempted again the following day.  At 13:00, five approaching Japanese dive-bombers were sighted by Armidale. Two aircraft were damaged by the corvette's guns, while the other three missed while attempting to evade fire. A second air attack occurred at 14:00; five Zero fighters distracted the corvette's weapons while nine torpedo bombers made attack runs. At 15:10, the ship was hit in the port side by two torpedoes in quick succession: the first into the mess deck, killing many of the soldiers there, the second into the engine room.

As the soldiers and sailors began to evacuate into the water, the Zeroes stopped attacking the sinking corvette and began strafing runs on those in the water. Ordinary Sailor Edward "Teddy" Sheean, who had been wounded in the initial attack, strapped himself into one of Armidale's 20 mm Oerlikons and opened fire on the aircraft. Teddy forced one Zero to crash into the sea and damaged at least two others; continuing to fire until he went down with Armidale. Low on fuel, the Japanese aircraft headed for home. The survivors found that the two ship's boats survived the sinking, and were able to fashion a raft from debris. 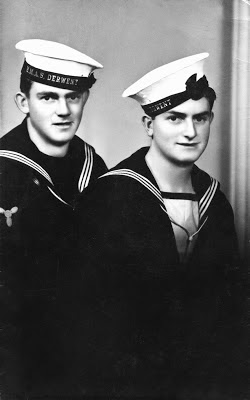 Teddy Sheean, after whom the Collins Class submarine HMAS Sheean is named
– the only enlisted sailor ever to have a Royal Australian Navy vessel named after him

The survivors remained together until midday on 2 December, when one of the boats, with the commanding officer aboard, set out for Darwin in an effort to find rescuers. At 10:15 on 5 December, they were spotted by a reconnaissance aircraft, and the 22 aboard were rescued by Kalgoorlie. On learning that more men were still at sea, an air search was organised, and the auxiliary patrol boat Vigilant was to stand by off Melville Island. That same day, the other boat, with 29 aboard, headed for Darwin, leaving the raft, with 49 aboard, behind. At 16:00 on 8 December, a PBY Catalina flying boat sighted the raft, now with about 20 aboard, and the second boat. The aircraft was unable to land to assist either group of survivors because of rough seas, but directed Kalgoorlie to the boat. The raft could not be located again, however, and the search effort was called off on 13 December. 40 of Armidale’s crew and 60 embarked men of the Royal Netherlands East Indies Army were killed. 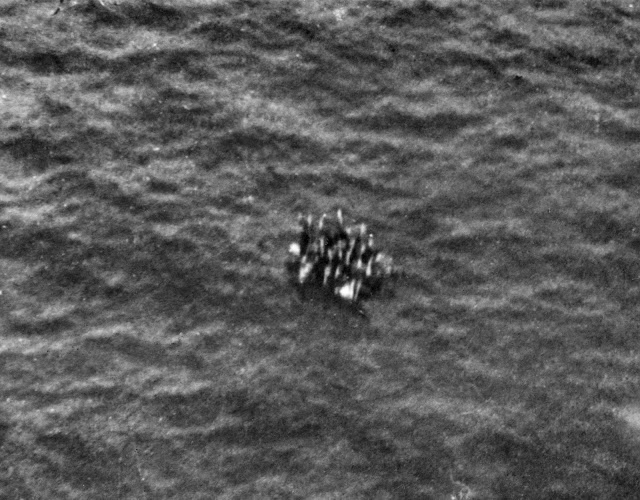 This raft of Armidale survivors were not seen again
after this photo was taken on 8 December 1942. 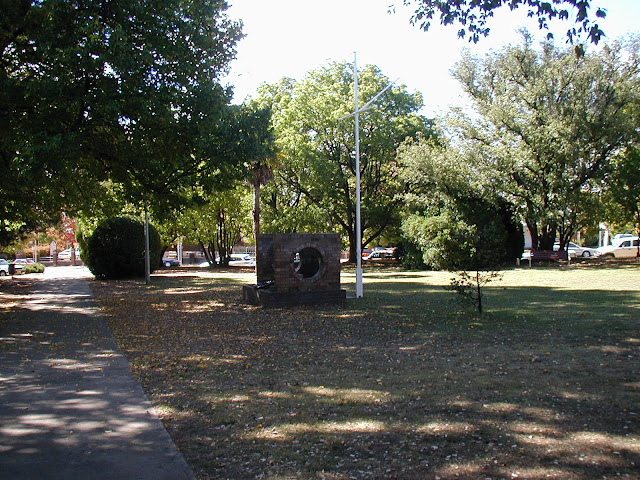 Source: The principal source for the above was Wikipedia; its account may be read here.