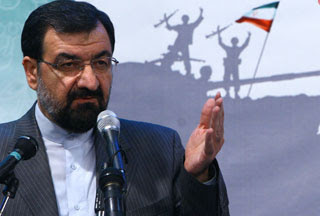 The entry of Mohsen Rezaei, Secretary of Iran’s Expediency Council, into the Iranian Presidential election line-up brings into the picture a conservative rival to incumbent President Mahmoud Ahmadinejad.

Rezaei is an interesting candidate:

- He led Iran’s the Army of the Guardians of the Islamic Revolution (AIRG – “Revolutionary Guards”) during the Iran-Iraq War. He held the post from 1981-97, at which point he left to become Secretary to the Expediency Council, and also Chair of the Commission for Macroeconomic and Commerce.

- He is one of several Iranian officials who have since 2007 been on an Interpol “wanted” list in connection with the 1994 suicide bombing of the Jewish Cultural Centre in Buenos Aires. Iran has always denied any connection with the bombing, in which eighty six civilians were killed and more than three hundred injured, but informed sources in Israel held it to be a response to an Israeli operation in Southern Lebanon three months before, in which Israel had bombed a Hezbollah camp and kidnapped Lebanese Shia leader Mustafa Dirani in an attempt to extract information on a missing Israeli soldier[i].

- Rezaei is also wanted by Interpol in connection with the human rights situation in Iran, and is unable to enter the United States or the European Union[ii].

- On a more positive note, he has stated that he would establish an international uranium enrichment consortium on Iranian soil – one which would include the United States, Russia and interested European countries – to continue Iran’s uranium enrichment program and at the same time address Western concerns about it[iii].

Rezaei is critical of Mahmoud Ahmadinejad’s economic performance, and in particular his mis-management of Iran’s oil revenues[iv], but he is not assessed as likely to be the successful candidate.

Under Iran’s Presidential system, any candidate who achieves 50%+1 of the vote is declared the winner. In the event of no candidate achieving more than 50% of the vote, there is a run-off between the two candidates with the highest number of votes in the first round.

Email ThisBlogThis!Share to TwitterShare to FacebookShare to Pinterest
Labels: Iran