Szigeti and Bartok at the Library of Congress

On 13 April 1940 a remarkable concert took place, a performance by two émigré Hungarian musicians, great musical figures of their day, the violinist Joseph Szigeti and the musicologist, composer and pianist Béla Bartók.
Both musicians had only recently arrived in America.  They had been deeply concerned about the repressive regime of Admiral Horthy in their native Hungary and the advance of Nazism and Italian fascism. Bartók forbade the broadcast of his works from stations in, or beamed to, Germany and  Italy in the 1930s, Szigeti refused to appear in Germany after 1932. As the situation in Europe grew worse, both of them decided to emigrate as a necessary protest. Szigeti left Europe at the end of 1939, and Bartók attended Szigeti’s final Budapest Concert, which included his Portrait, Op. 5.
Bartok, although determined to leave before Hungarian surrender to what he called “bandits and assassins”, proceeded at a somewhat less hurried pace. He sailed to America just in time for the April 1940 concert, and returned to Hungary in May to settle his affairs, giving his own farewell concert on 8 October.
The program for the Library of Congress “Sonata Recital” was a wonderful one:
-  Beethoven: Sonata in A major, Op. 47, “Kreutzer”
-  Bartok: Rhapsody No. 1 for Violin and Piano
-  Debussy: Sonata for Violin and Piano
-  Bartok: Sonata No. 2 for Violin and Piano 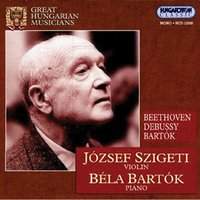 We are fortunate that this historic concert was recorded and the sound quality is quite good.  I acquired it on vinyl in 1965, but it has been released on CD. I acquired the version released on Vanguard Classics (ATM CD 1583) a few years ago.  That edition seems to have lapsed, but a Hungaroton release (HCD 12330) is available from Presto Classical here.
Posted by PAUL BARRATT at 11:11 PM