The University of New England Mace


This is beautiful silver mace was donated to the University of New England in 1957 by its then Deputy Chancellor, Phillip Arundel "P.A." Wright, a New England grazier and a great benefactor of the university.  I took this photo during the afternoon tea on the Southern Lawn which followed its first outing at the Graduation Ceremony in April 1957. 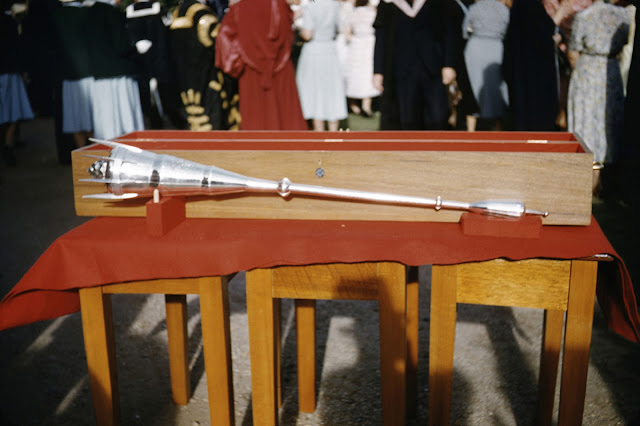 P.A. was a remarkable man, and his entry in the Australian Dictionary of Biography is well worth reading (see here). Among his other claims to fame, he led the campaign which led to the New England National Park being gazetted in 1934, and was the father of the great Australian poet Judith Wright.

He was a member of the committee that successfully campaigned for the establishment of a university in Armidale in the 1930s, was a foundation donor to the University College and a member of its Advisory Council from the time it was established in 1938, and of its Council from the time it became an autonomous institution in 1954. He was Chancellor in my time at the University in the early 1960s, succeeding the first Chancellor, Sir Earle Page.

My father carried the mace in university processions and on all academic occasions from the time it was donated until 1994, the year before he died. He had become the default person responsible for University ceremonial after helping to organise the 1955 ceremony at which Governor-General Sir William Slim installed the first Chancellor, Sir Earle Page, and in 1960 was appointed the University’s first Esquire Bedell, a ceremonial post that harks back to mediaeval times when University Chancellors were for very good reason preceded by a gentleman carrying a mace.

In our own more troubled times, note the 1950s-style security on this valuable object – none, it’s just on public display on a table for the duration of the afternoon tea.
Posted by PAUL BARRATT at 6:31 PM