A day trip to Dangar Falls

I guess January is a time when most of us remember summers past and what we did in the holidays of our youth.

The first few days of January always remind me of a particular day in very early January of one particular year, 1962, the start of my second year at the University of New England.

One fine morning in the first few days of January 1962 the late Helen Beh (1), Susan Somerville (2) and I packed a picnic and headed off in Helen’s Volkswagen in the direction of Dangars Falls, a spectacular 120m waterfall about 25km southeast of Armidale, at the head of Dangar Gorge in Oxley Wild Rivers National Park.  It was Armidale’s quietest time – the boarding schools were closed and the university and teachers college students had all gone home, so there were relatively few people about except people like Sue and me, both children of academics, or Helen, preparing herself for her honours year.

Both Sue and Helen were taking up appointments that year as Demonstrators in Psychology.  Sue, who was a year ahead of Helen, had just completed her honours year, becoming the first female student to be awarded a University Medal in Psychology.

The sole purpose of the last stretch of the road is to convey people to the gorge; after the last farm gate was left behind it goes nowhere else.  That last stretch of a kilometre or so was in dreadful condition, with ruts so deep that Helen’s VW began bottoming out, and although it was protected by the metal shield underneath there was some danger of running aground in such a way that the driving wheels were no longer in contact with Mother Earth.

A lesser spirit might have abandoned our quest at this stage, or alternatively locked up the car and made the last leg of the journey on foot, but no, that wasn’t what one did when Helen had set her mind to something.  Sue and I got out of the car and began filling the ruts ahead of the wheels with fallen timber, stones or whatever we could lay our hands to, and metre by metre we made our way to where the road comes to an end above the creek near the top of the falls.

Of course when you on an outing like this with Helen you don’t just admire the breathtaking view down the gorge: 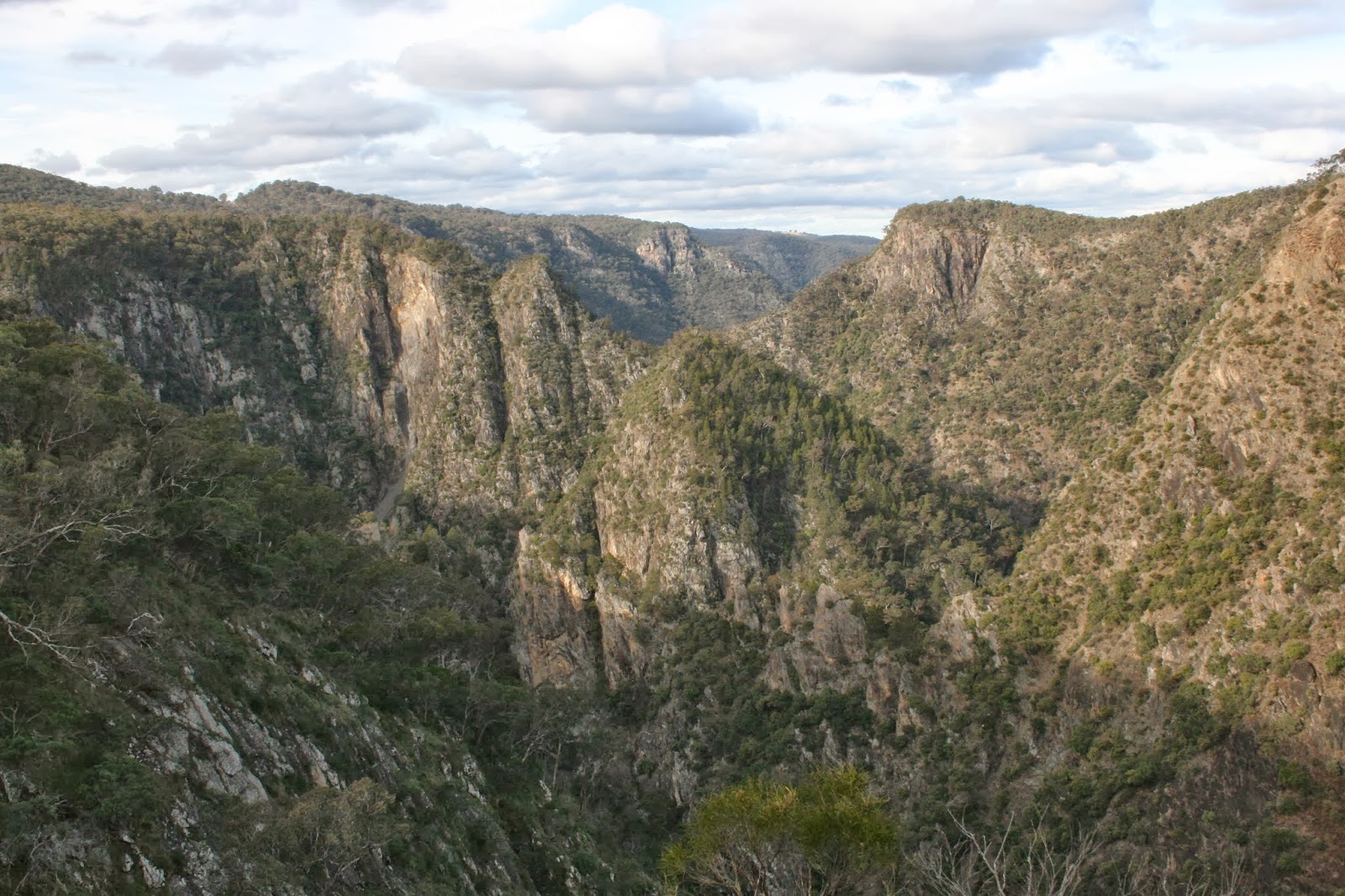 or even just content yourself with walking around the edge of the gorge a bit to where you can get a view of the falls: 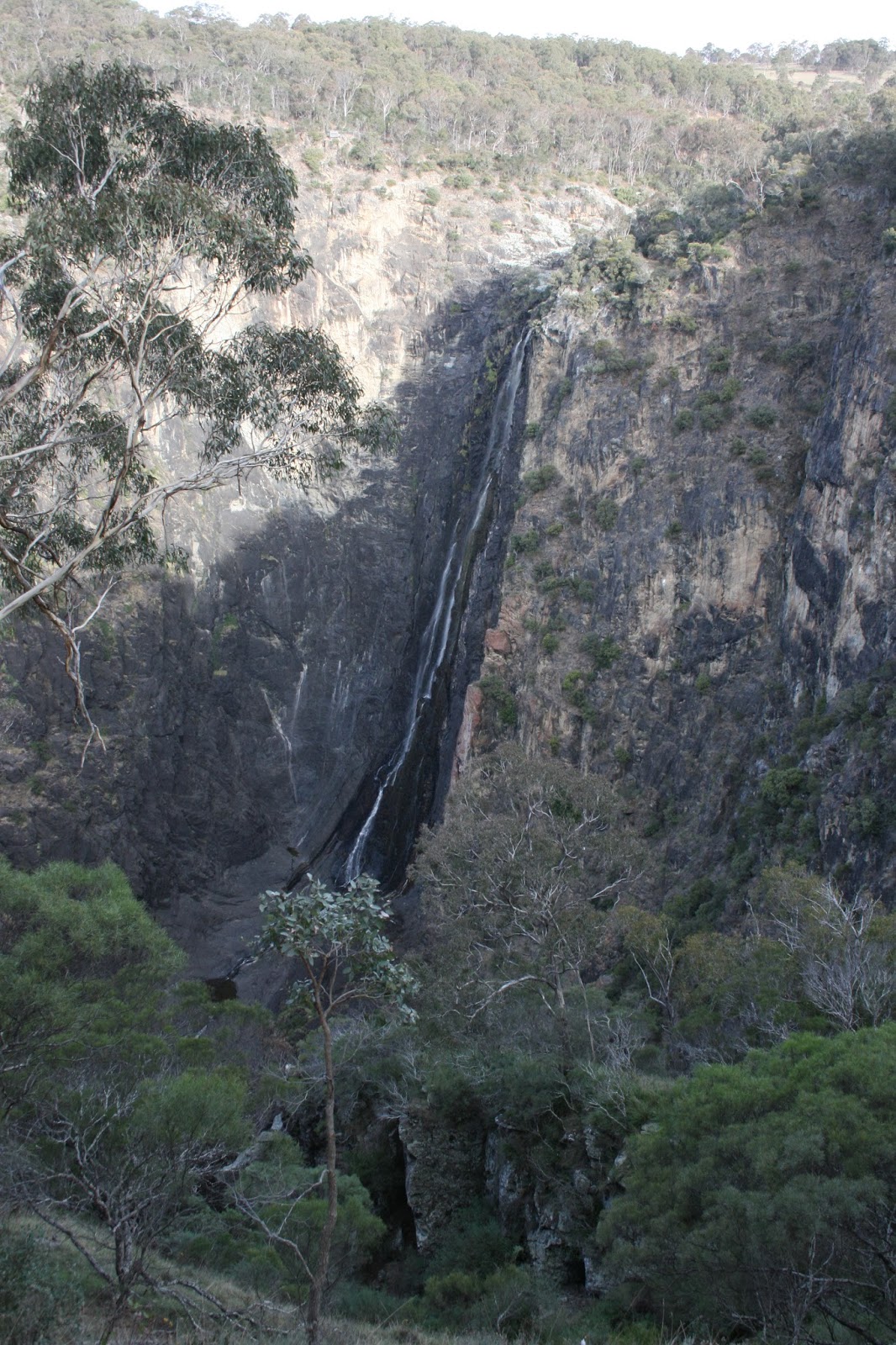 Not at all. We have to climb down here: 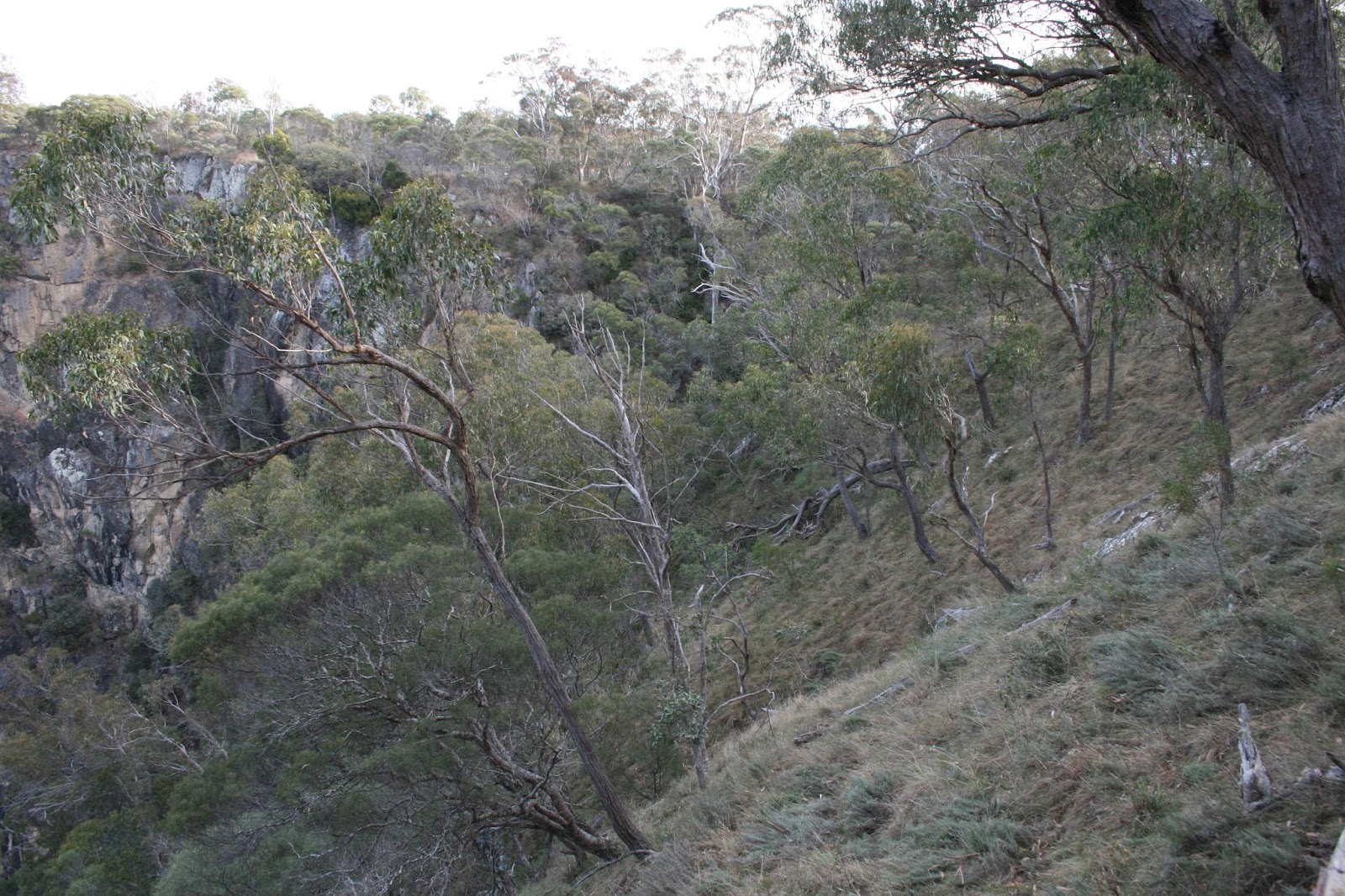 In order to get to here and see how it all looks from below: 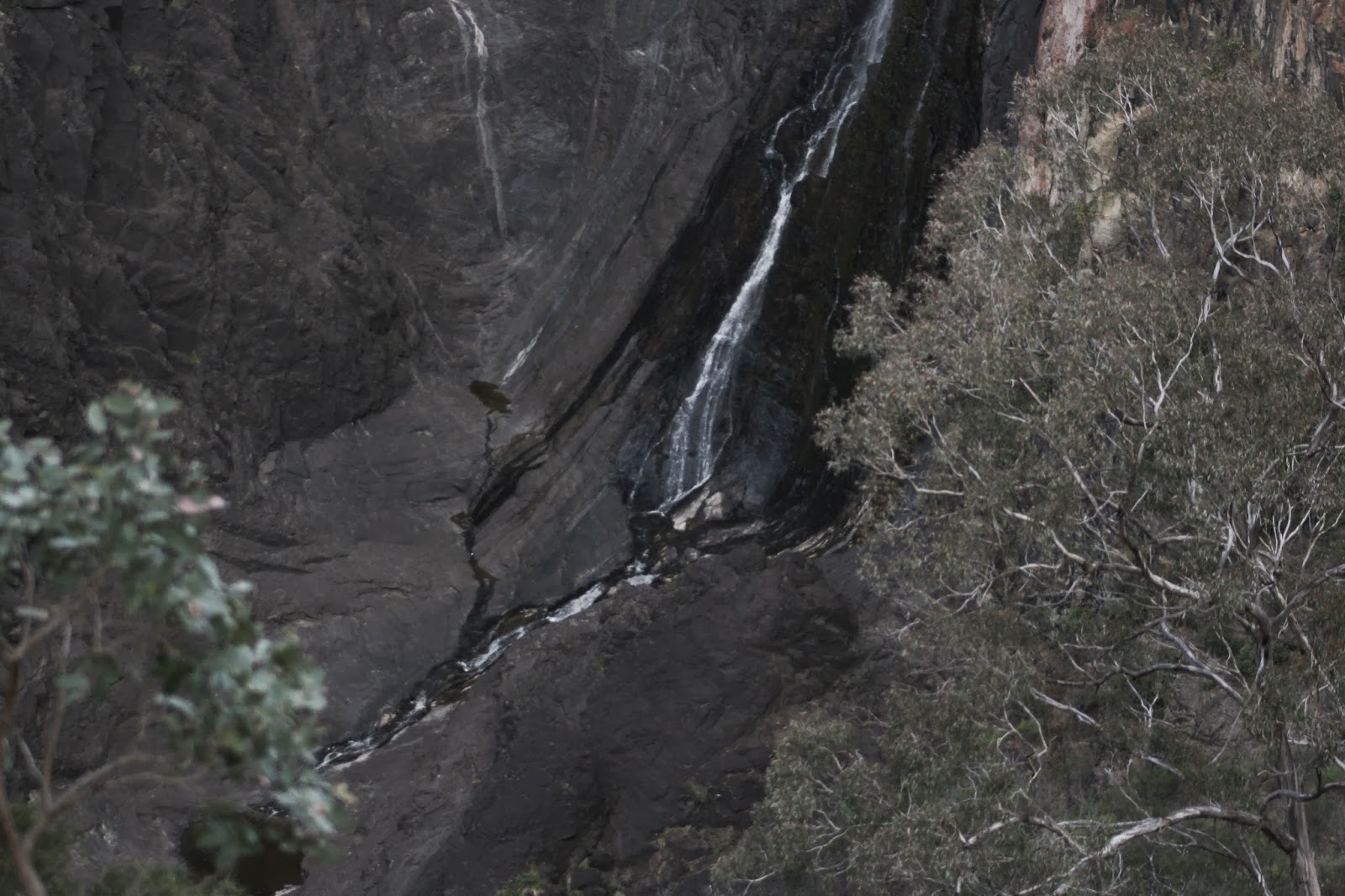 Which of course we did. We spent a wonderful hour or so exploring the bottom of the gorge: 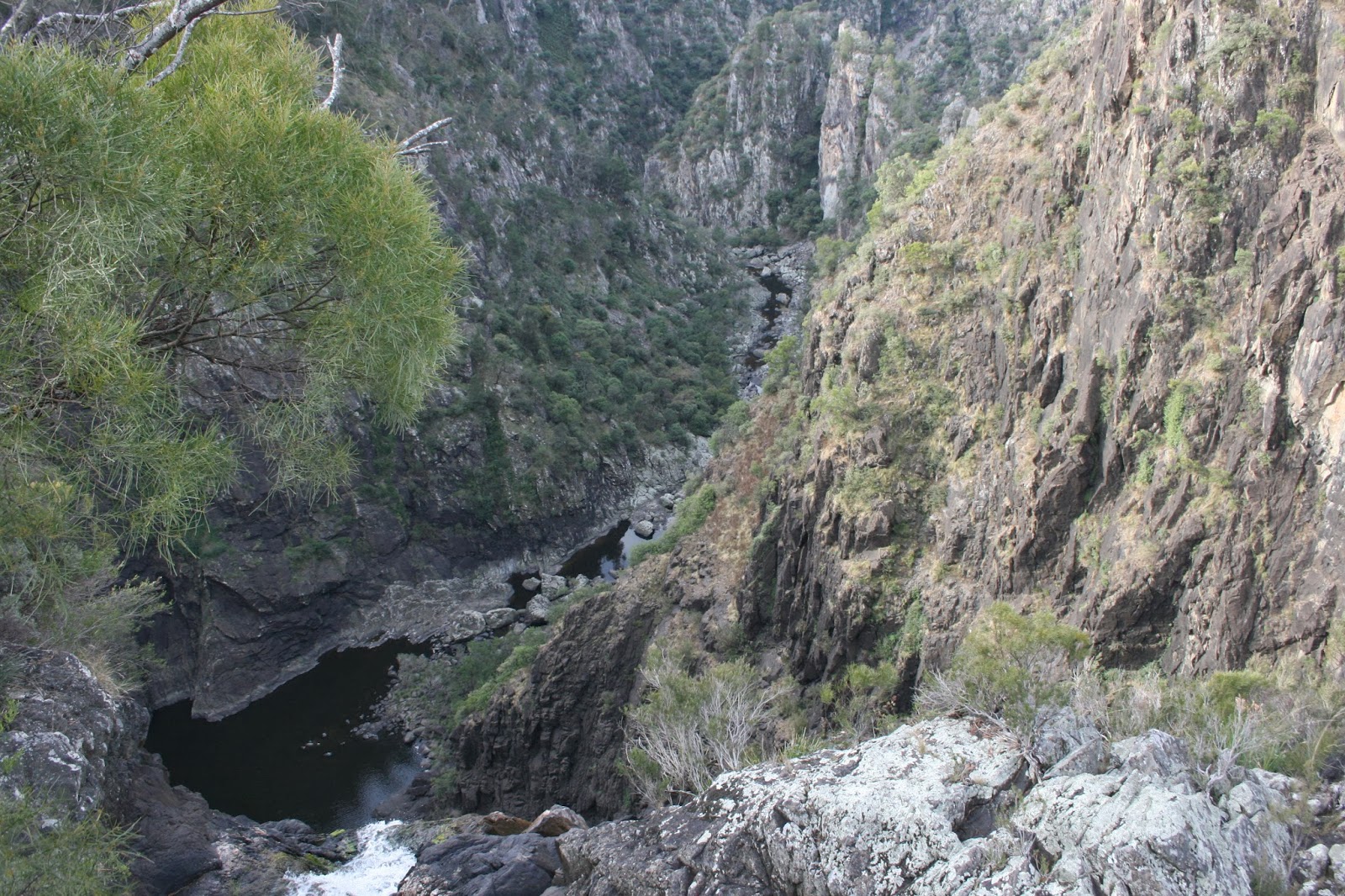 and enjoying the sun, before making our way back up the steep slope (no trivial matter) and manhandling the Volkswagen back over the rough patches until we were on our way and returned to the Somerville’s place for a well-earned cuppa, at the end of a memorable day, one which came back to me vividly when I revisited the Falls a few weeks after Helen’s death in 2012 and took the above photos.
____________________________________
(1) For more about Helen see the obituary written by her husband Cyril Latimer at Vale Helen Beh, 1941-2012.

(2) Susan Somerville was the daughter of Professor Jack Somerville, the Professor of Physics, who was one of the foundation members of the University staff, having taken up an appointment as Lecturer in Mathematics and Physics in 1938. As far as I know, Sue was the first graduate of the university who was the offspring of a student or member of staff, and I was the first offspring of one of the students at NEUC/UNE. She studied under my father, I studied under hers. It was all very “family” in those days. Sue is now a Professor Emeritus at Arizona State University.
Posted by PAUL BARRATT at 4:44 PM

Beautiful to read this and remember Sue, Helen and Paul and see the photos of Dangar Falls again.