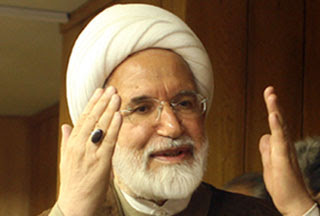 Another reformist candidate in Iran’s forthcoming (12 June) Presidential election is Mehdi Karroubi, an ethnic Lur who was born in 1937 in Alīgūrdaz, Lorestan Province in Western Iran. A cleric, Karroubi studied theology and Islamic Studies in Qom and Tehran, attending courses offered by, amongst others, Ruhollah Khomeini.

Karroubi is Chairman of the National Trust Party, which he founded in 2005. He was speaker of the Iranian Parliament (Majlis) from 1989-92 and from 2000-04. He is a supporter of Supreme Leader Ayatollah Ali Khamenei, to whom he was an adviser and who appointed him to the Expediency Discernment Council, but is a critic of the Guardian Council, the most influential body in the Iranian political system.

Karroubi resigned all his political posts following an unsuccessful tilt at the Presidency in the 2005 election.

In his first term as speaker Karroubi identified himself with the radical faction which pursued populist policies and favoured state control of the economy. In 1989 he headed an association of radical clerics but he left that group to found the National Trust Party. He continues to favour a strong role for the state in the planning of the economy, but has been a strong advocate for the human rights of Iranian citizens, including improvements in the rights of women and the rights of religious and tribal minorities.

On freedom of speech and information, Karroubi has criticised the Ahmadinejad administration for its heavy handed approach, but he still wants to retain an authorisation process. He acknowledges the downside that people might assess the material for conformity with their own views rather than the interests of the society, but promises that if elected “even my own newspaper will be allowed to criticise me”.

Karroubi supports the idea of attempting to resolve conflicts with the United States and regards President Obama’s moves towards a better relationship as a positive development, which he will pursue “in accordance with national interests and national pride”.