Afghanistan: the getting of wisdom 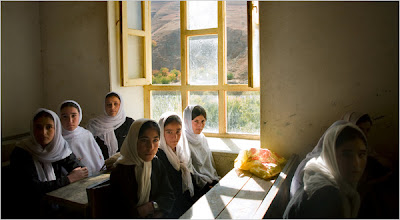 Above is a charming photo, published in the New York Times, 12 November 2009, of Afghan schoolgirls in their first year (seventh grade) at the new girls’ high school at Fargamanch in the Jurm District of Badakhshan in northwest Afghanistan. The school was built after several years of the Aga Kahn Development Network badgering the local mullah for permission.  It is one of several projects involving small grants to local communities, described in the New York Times article, which is accompanied by an album of 13 photos.

Does this project require courage on the part of all concerned? Definitely. Is the idea of giving girls a secondary education something that is new to Afghanistan? Definitely not.

In the early 1920s the modernising Amir Amanullah Khan introduced a number of reforms designed to contribute to the social and cultural changes that would be necessary to achieve his objective of transforming Afghanistan into a viable modern nation-state. As part of his program he made some important changes in the educational sphere. In addition to Islamic subjects, which were reinforced as permanent components of teaching at all levels, secular curricula were introduced and numerous new schools at primary and secondary levels and night literacy classes were opened. Amanullah and his wife participated actively in the teaching, he attending one of the night classes, while Queen Soraya taught in the first girls’ school.

Soraya was a great ally for Amanullah in the improvement of the lot of Afghan women. She was the daughter of a Syrian mother and the great reforming nationalist and mentor of the Young Afghan movement, Mahmud Tarzi, who had had a modern education in Damascus and Constantinople. She and her mother pioneered the cause of women in demanding not only education (virtually non-existent for girls prior to 1920), but also equal rights and opportunities.

These initial educational measures were followed by the despatch of a number of Afghan students, including women, for tertiary training in Turkey and Europe.

There were more controversial moves in this very conservative society. Women were granted the right to freedom of choice in marriage and equal inheritance rights with their brothers and sons. An informal anti-polygamy campaign was launched.  There was active encouragement of women to unveil within the bounds permissible in Islam; Queen Soraya personally took the lead in this. In the later stages of Amanullah’s rule people were required to wear western dress at court functions and in certain parts of the capital.

Unfortunately a series of provincial rebellions in late 1928 forced Amanullah into a situation in which he had to enter into negotiations with the Pashtun chieftains and ulama (clerics). They gave him an ultimatum, which included the following provisions:

- expulsion of the Tarzi family from Afghanistan, with the exception of Mahmud Tarzi, who was to be tried

- closure of all schools for girls (sound familiar?)

- recall of all the girls sent abroad for education

- restoration of the veil, and

- restoration of the sharia laws and the ulama to their previous positions of eminence.

Amanullah’s position was by this time so desparate that he was prepared to acquiesce in many of these demands in order to stay in power, but the internal situation  in Afghanistan deteriorated to the point where his situation became untenable and he abdicated in an (unsuccessful) effort to end the chaos and bloodshed.

For the record, although Amanullah’s impatience and inexperience were contributory factors in the collapse of his program, Amanullah, Tarzi and the modernising Young Afghans around them got precious little help from any external actor in implementing their reforms, and from most quarters they were actively undermined and/or humiliated.  Amin Saikal, in his Modern Afghanistan (page 72) describes Amanullah’s situation as deteriorating to the point where he was

... disliked by the British, ignored by the Americans, deceived by the Soviets and incapable of giving much credibility [with Central Asian Muslims] to his pan-Islamic stance. This played into the hands not only of those foreign forces which wanted him replaced by a more receptive figure, but also of the domestic opposition which was gaining strength on the basis of flaws in his policies of reform.

We are all paying for that now.

Note: The principal source for this account is Amin Saikal, Modern Afghanistan: A History of Struggle and Survival, I.B. Taurus & Co Ltd, 2006.

Email ThisBlogThis!Share to TwitterShare to FacebookShare to Pinterest
Labels: Afghanistan