In just six months the Obama Administration’s policy for Middle East peace has travelled the full gamut from history (in the making) to tragedy (the collapse of the effort) to farce (praise for the man whose intransigence brought about the collapse). The tough talk of May (there must be a freeze on all settlement building) had given way by September to handwringing and bleating from the sidelines, which in turn has given way to Mrs Clinton praising Israeli Prime Minister Binyamin Netanyahu for his “restraint”.

The picture below tells it all. All that is missing is the boater and cane. Does this look like a picture of a Secretary of State who has just told the Israeli Prime Minister in no uncertain terms what is expected of him, or of an Israeli Prime Minister who has had that message? Who is in charge here, and who is representing the client state? 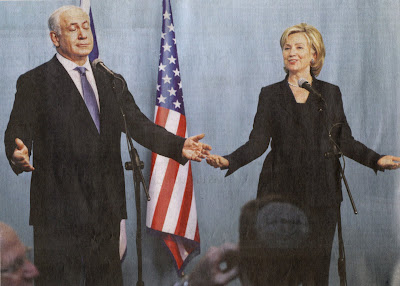 Mrs Clinton likes to think of herself as one very tough lady, not a person to be trifled with. On her recent visit to Islamabad she really put those Pakistanis in their place. But when it comes to Israel, it is more like Stockholm syndrome – praise for the abductor/tormentor.

The next phase of the Middle East tragedy will be more like the dreadful 1989 film Weekend at Bernie’s. Whenever anyone knocks on the door to enquire after the health of the Middle East peace process, Mrs Clinton and Mr Netanyahu will drag the political carcase of Mahmoud Abbas into the frame for a photo-op and assure everyone that it is doing very nicely thank you, followed by shared helpless laughter off stage once the cameras have gone.

For a related post with more background and analysis, see Game, set and match to Mr Netanyahu.