Fifty one years ago today I participated in the annual observances by The Armidale School, and the city of Armidale itself, of Anzac Day. These consisted of a dawn service on the front field of the School, followed by a march, with ex-servicemen and the local units of the Citizens’ Military Force (CMF) – the New England Company of the Sydney University Regiment, and the 12/16 Hunter River Lancers. The March ended at Hoyts’ Capitol Theatre, where we filed in for an ecumenical service.
These small town commemorations of Anzac Day were no celebration of militarism or warfare, they were simply part of the life of the community.   They were quite solemn affairs; everyone knew someone who had not come back, survivors who were still paying the price, or townsfolk whose lives would never be the same. My pre-school teacher and her two sisters lost their fiancées and their brother in World War 1.
The commemorations were also an acknowledgement of the service of those who had put themselves in harm’s way and lived to tell the tale – not that any of them ever did tell any tales of their war experiences in my presence. In a small town where everyone knows everyone, people were aware of and respectful of the contributions of their fellow residents.  Members of the old New England Light Horse had been at Gallipoli and the charge at Beersheba.  My dentist lied about his age and was on Gallipoli as a 15 year old. A friend of my parents from Sydney University days, a researcher at the CSIRO Research Station at Chiswick, had been a member of Z-Force, the special operations unit that made raids into Japanese occupied Southeast Asia.
On that Anzac Day in 1959 my mother was among the watchers in the main street, with my father’s trusty Voigtlander Vito B in hand (father was marching with SUR).
In the first of the two photos below, the gentleman in the black beret was (then) Major Des Harrison, for whom I wrote an obituary published in the Sydney Morning Herald on 24 April 2005 (see Remembering Des Harrison).  The lanky Sergeant with the word “Sydney” on the Sydney Dry Cleaners van almost touching his shoulder is your bending author.  The nearside cadet in the front rank (third cadet from the left of the photo) is the late Alex Buzo (see The Alex Buzo Company).
The shop behind is Richardson’s Department Store, established by the Richardson family in the nineteenth century.  Clifford Russell Richardson (1890-1946), the father of two of my father’s close friends at TAS, and himself an old boy, was the first Australian to be awarded a Military Cross on Gallipoli (Gazetted in London on 15 June 1915 – see the Australian War Memorial’s entry here, and the National Archives entry here). 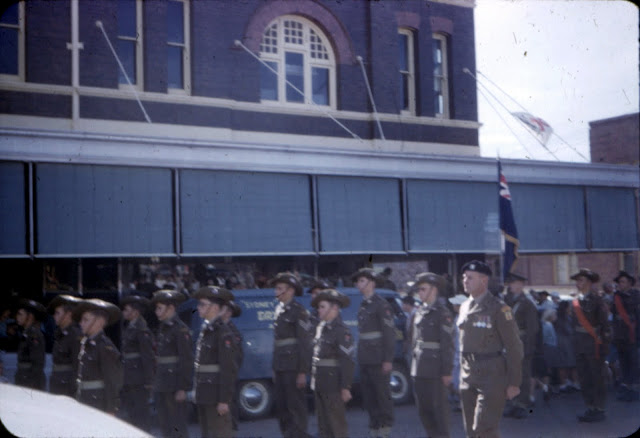 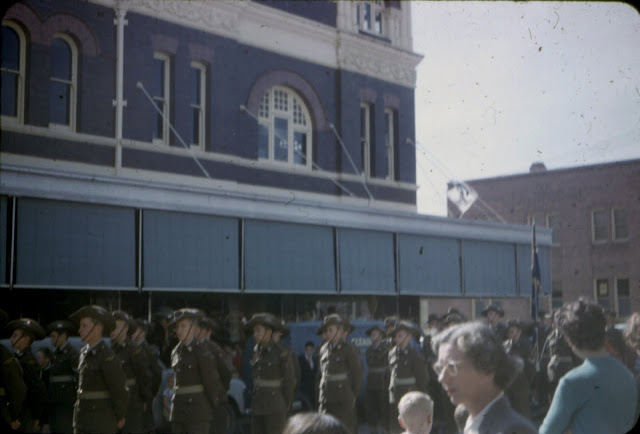