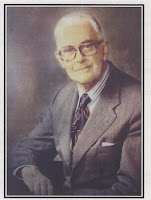 In addition to his great contribution to Australian theatre and his non-fiction works, playwright Alex Buzo was a very elegant writer of travel pieces for the newspapers, and contributed two fine obituaries of our former school masters. One of these, a tribute to Brian Mattingley DFC, was published in the Sydney Morning Herald on 5 February 2005.
Anzac Day seems a good occasion on which to remember a great educator man who had a distinguished war record, and I republish this piece as a tribute not only to him, but also to my former classmate Alex.
Joe held the Arnold Line at Armidale
Brian Mattingley, Teacher and war hero, 1914-2004
"Sedete omnes," he would say as he swept into class.  Others may have said "Sit down, everyone", but he always made an entrance, and like many teachers of his era he was a performer.  Brian Mattingley, long-time senior master at the Armidale School (TAS), has died at 90.  The letters after his name, DFC and BA, tell the story.  He was a war hero and an educator.
In the quadrangle at TAS, where he taught English and Latin for 40 years, he cut quite a figure, being tall and pigeon-chested and known behind his back as "Joe".  No impersonator could complete his act without the stabbing accusatory finger and the strangled cries of fury ("Mou! Mfff!").  In his study he kept a cane called Horace, for those who did not get the message: this was an Anglican boys' school dispensing the muscular Christian philosophy of Rugby's Dr Thomas Arnold.
One of three brothers whose father was a dentist, Brian John Mattingley was born in Tasmania and educated at Launceston Grammar; after university and a sojourn in Adelaide he joined the staff at Armidale in 1939.
The Mattingleys were to make quite an impact on Australian education; brothers Max and David had distinguished careers at Geelong Grammar, Prince Alfred College and All Souls, Charters Towers.  Brian served as deputy and acting head of TAS, where he "really ran the place" at times.
In World War II, Flight Lieutenant Mattingley was a navigator in the RAAF, flying 36 missions over Europe for Bomber Command.  Having proved he had the right stuff, he returned to Armidale in 1946 and set out to do well in the tricky climes of peace.  A conservative Anglican, he favoured tweed jackets, drove a Wolseley, and devoted himself to the profession of schoolmastering, as it was called.
He looked like a film star, one of those Michaels (Craig, Denison, Redgrave, Wilding) who abounded in postwar English cinema, and made quite an impact on speech days.  My mother liked him, and she was not Robinson Crusoe.  He was seen by the school hierarchy as "good for recruitment", but he was married to the job and was essentially a Catholic priest in a Protestant setting, even attracting the same "waste of a good man" comments from the female public.
From his office located at the T-junction of the school's main corridor and the covered way, he could see a cloud of smoke, hear an obscenity and sense a crooked tie or egg-covered face.  It was a reign of terror, with the amused approval of parents.  I felt the wrath of Horace only once, but it was enough to know that Joe was not all talk.